I have so much to do and so little time to do it. A couple of times a year I begin to feel completely overwhelmed. I think I'm getting there right about now. But you guys don't need to hear my troubles. Just understand that if my blog posts are a bit skimpy and filled with typos for the next week or two, there are good reasons behind it. (Not that there are ever good excuses for typos, but well. . .)

Afton Station today was filled with Methodists! A bus from Claremore brought 22 senior citizens to our door mid-morning. They were on a "mystery tour". They had no idea where they were going when they boarded the bus, but they put their trust in their fearless leader, Ahnawake (which means "bright eyes" in Cherokee). Here she is. 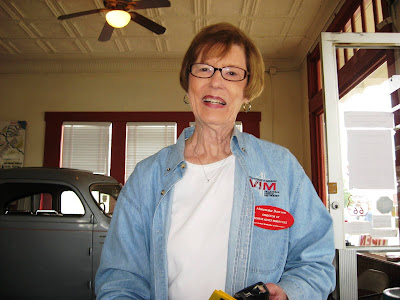 I found that herding Methodists for the purpose of taking a picture of them is akin to herding cats. After a bit of a struggle, I managed to get most of them in two photos, although it was impossible to get most of the men out of the car showrooms for something as mundane as photography. Here are those who agreed to pose. 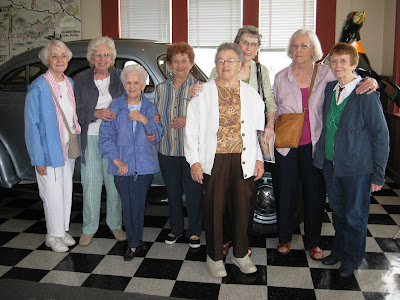 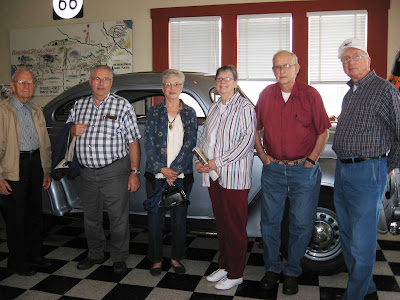 I believe they all had a good time. Many told me stories from their childhoods, and several complimented the cars. After their visit, they headed for a "mystery" lunch in Vinita. (Their leader whispered to me that the venue would be Clanton's.)

We had other visitors too, of course. They came from Palestine TX, Battle Creek MI, Owenton KY, Horse Creek OK, and Dunlop Ayrshire Scotland. Here are the folks from Palestine. They'll be ending their Route 66 trip in Oklahoma City and doing the western half another time. 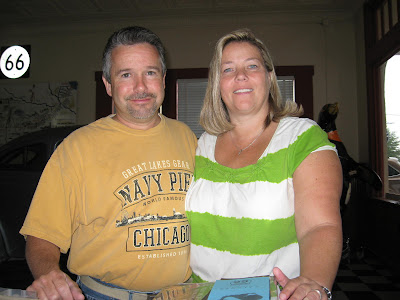 Phil is about to begin on the large billboards he's painting for Afton Station. I must go and make him some font stencils. See you on Saturday!

"I found that herding Methodists for the purpose of taking a picture of them is akin to herding cats."

I'm Southern Baptist. All you'd need to do to get us in one room is say there's a pot-luck lunch in there. :)