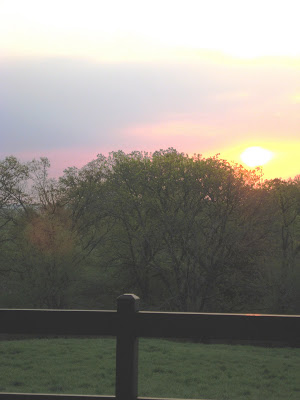 Once again, a quiet morning became a rather busy afternoon at Afton Station. I arrived early again, after taking a few short side trips on the way to Afton. The sunrise above was taken on a short side road off Route 66 near Claremore.

Further down the road, after the sun had fully risen, I took a quick photo of the wonderful Chelsea Motor Inn, hoping it would remind all of you that it's a fantastic little mom 'n pop motel which should be considered by anyone who is close to Chelsea when they're ready to turn in for the night. Trudy and Frank will greet you with open arms and treat you like royalty, and the price is right, too! There are only six rooms, so get there early! 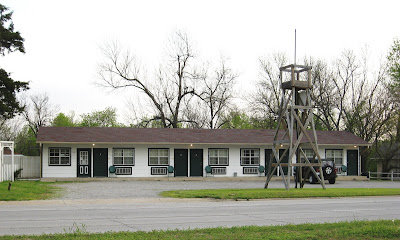 Marly dropped by in the morning and we chatted for an hour or two. The only morning visitors were a couple from Afton whom I'd never met before. It's always nice to introduce our place to local folks. They said they walk past all the time, but just never thought to come in!

Later, we had a visit from the grandchildren of an elderly Afton citizen. The grandkids are now living in Madison WI, and Mesquite TX and were in town to visit grandma. They were reminiscing about their childhood days visiting her in Afton. A gentleman from Framingham, MA came in. He decided to explore Oklahoma Route 66 while he's in the area on business. Two other men visited as well, but didn't tell me where they came from. Betty W. came late in the day and stayed until closing. It was nice to have a bit of time to visit with her.

My final visitor was River Pilot from Oregon. He has visited before, and he's the gentleman who is responsible for the new, extremely comprehensive Route 66 GPS software for use on Garmin and TomTom. It's on the market now, and available at Best Buy, soon to be available at various places on Route 66, too. I got a demonstration and I'm impressed. My favorite feature, which is on the deluxe edition, puts out an audible "beep" when one approaches a Route 66 sites worth visiting. Maybe that will slow down all those people who race through Afton, heads down and never looking from side to side. There are at least 10 points of interest in little old Afton alone! 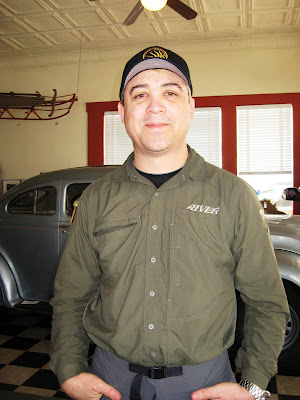