Recipe for a Great Day

*Take one beautiful, sunny warm day.
*Add a strong wind, just to spice it up.
*Sprinkle with friends, new acquaintances, and a large helping of interesting people.
*Roll into a ball and cook on Route 66 for about 6 hours, or until tired from smiling so much.
___________

It was indeed a nice day at Afton Station on Route 66 on this fine Sunday. Ron M. and I arrived a bit early, as we decided to take the interstate (boo!) for once. We knew a special guest was due early and we didn't want him to wait. Indeed, shortly after we opened up, Per Skye and his son Johnny arrived. They are from Sweden and had alerted me several months ago of their visit. Per collects model cars, and here he is looking at some of ours. 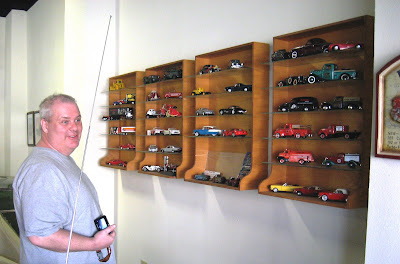 He bought a pedal car on Craig's List and picked it up on his trip to America. He'll be sending it back to Sweden shortly. Here he and son Johnny are admiring it. 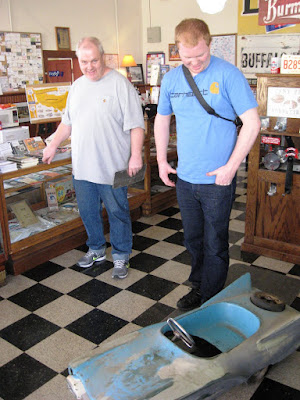 Six folks from Merriam, KS came next. One couple had been to Afton before and brought some friends to see our place. I'm especially fond of very enthusiastic guests like these. They were heading off to the Coleman Theater in Miami to hear a concert on the old Wurlitzer organ there. The Mighty Wurlitzer of Miami, Oklahoma

At the same time two women, one from Jenks OK, and one from Broken Arrow OK arrived. Later, there were visitors from Greenwood, MO and Tontitown, AR. Finally, our friends from Tulsa, Ron Warnick and Emily Priddy stopped by on their way home from the Pixar "Cars" gathering at 4 Women on the Route in Galena, KS. They stayed with us until just before closing. Tattoo Man was also with us for part of the day. His '56 Chevy broke down on the way to Afton, so he had to have it towed. Poor guy! But he went home and got his other car and joined us anyway. All in all, a fine day.