The Lemons: No visitors came to Afton Station for the first two hours this morning.
The Lemonade: I had time to settle in with a new book. A rather renowned writer has asked to interview me in May for a book he's writing about Route 66. In preparation for meeting this man (who will remain nameless for now), I bought one of his earlier books, an authorized biography of a very well-known political activist having nothing to do with Route 66. I was kind of expecting it to be academic and boring, but it's incredible! I couldn't put it down! What a great way to start the day. More on all of this after I meet the gentleman in question.

In the late morning, a charming couple from Boise, ID came through the door, accompanied by "Charlie Weaver", their neat old mechanical toy they've brought on the trip to pose in photos with them at each of their stops. Coincidentally, I was thinking about the original Charlie Weaver (Cliff Arquette), the old time TV character, only this morning when I was listening to a lengthy interview with his grandson David Arquette on Howard Stern. Here they are, with Charlie. Tripper made sure he was in the picture, too. 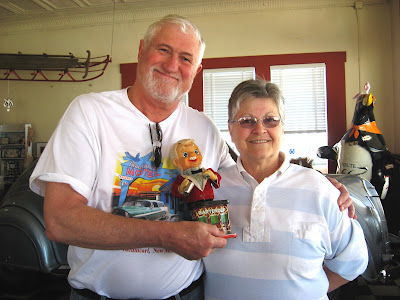 Visitors started coming in after that. A fellow on a motorcycle from Chelsea, OK visited for the first time after passing the Station several times before. As the former curator of a car museum in San Diego, he was most impressed and interested in the cars.

Other visitors were from Miami OK, Bethlehem PA, Sayr PA, and Munster IN, 12 in all. Regular visitor and friend Jon Edwards from Tahlequah stopped in on his motorcycle. Nice to see him again for the first time in this new season.

I drove down to Buffalo Ranch early this morning to snap a photo of this new building which has just been completed at the site of what's now the truck stop. It's unoccupied, but looks like an old western saloon or general store. Wouldn't it be nice if it turned out to be a tourist-friendly business? It's right next to the bison pens, so it's far enough away from the trucks to recreate the feeling of the old, venerable Buffalo Ranch that used to stand on the spot. Anyone know what it's going to be?

I also took a little ride around those back streets of Afton that I mentioned on Sunday. Here's a somewhat typical Afton back yard. There are quite a few pastures with horses behind homes. Interesting. 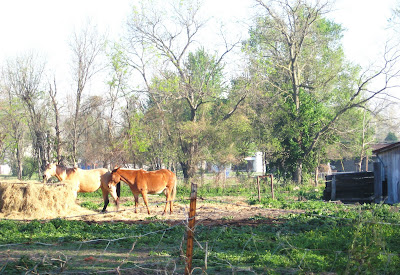 Spring is here and the species Cruiserus Americanus is emerging from hibernation. I've been finding myself grabbing a map and tour guide instead of a novel in my spare time.