I don't even know where to begin. It was a wonderful, varied, exciting, and BUSY day at Afton Station! I'm somewhat limited in my time to blog tonight, so I'll dance over everything rather quickly, in hopes that I'll find time in the next few days to elaborate on some of the details.

First, the visitors. There were 24 today, which is a huge number for an April weekday, and I'm sure the weather being absolutely perfect had something to do with it. Visitors came from Helsinki Finland (three RVs worth!), Oslo Norway, Kansas City MO, Guadalajara Mexico, Temple TX, Dawson TX, Oswego KS, and Mounds, Ketchum, Grove, Afton, and Tahlequah, OK.

Today's youngest visitor was Savannah, a two-month-old who lives right here in Afton. 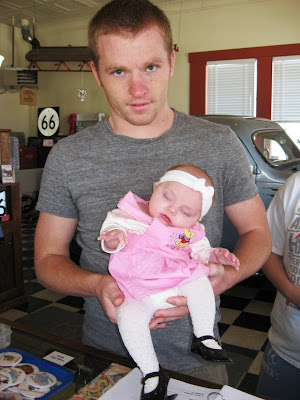 This is Charley Johnson, the kind gentleman who gave us the antique cash register. He stopped in to see if we were treating her right. He was delighted by my appreciation for the cool machine. 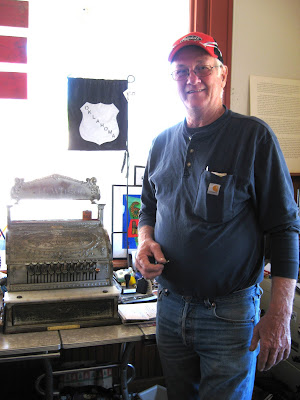 Regular visitor Jon Edwards from Tahlequah, OK brought his brother from Texas to look at the cars rather late in the day. However, his timing was perfect, because. . . . 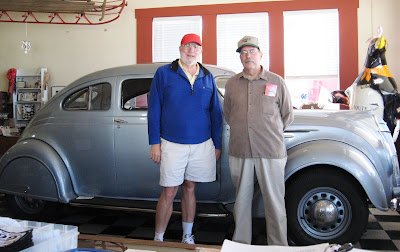 They got to be the two first guests to see the new 1917 PACKARD MOTORBUS!

Here it is as it rolled into the Station. David and Marly went to Kansas to pick it up in the morning and arrive back in Afton by mid-afternoon. 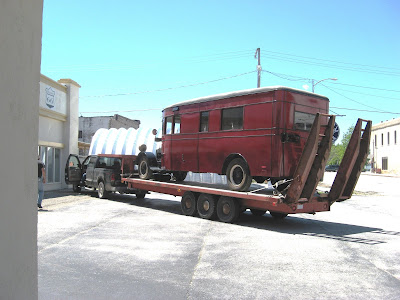 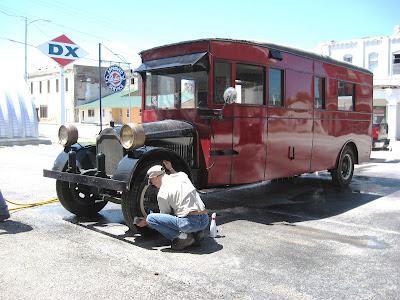 . . . while Marly and Phil scrubbed the topsides. 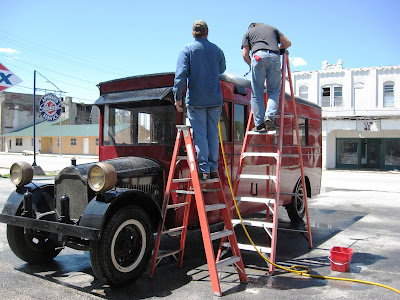 The vehicle is such a beauty, and in great shape. I had time to do a little research after David told me it was originally owned by a Mr. Pickwick of the Pickwick Stage Line. This is interesting, to say the least. Supposedly, it's the first motorcoach (turned into an early version of an RV, even fitted with a bathroom. I can just picture a family camping out on a trip across Route 66 in this vehicle. And it's the only one made out of a Packard!

In other news: The Shaved Ice place on our property will officially open on Monday!!! Yippee! Please come visit and have a hot dog and a cool, refreshing pile of flavored ice!

An antique motorhome and a shaved ice place. Two more reasons to go pay you another visit.

I'm not a big car person, but that Motor coach is quite interesting!! What a great addition!!