On the last full day of Sarah's visit here, we decided to take a little ride. (I don't get enough driving in my regular life, so I needed some more. Ha ha) We needed a dose of Route 66, so we headed west. The original goal was the Rock Cafe (Stroud, OK) for lunch, but it was still too early to eat when we got there, so we kept going. At this point, a visit with Jerry "McJerry" McClanahan sounded like fun. He's got his new gallery all set up, and I'd never seen it since he finished it. So, it was off to Chandler, OK and, as luck would have it, Jerry was there. His house is right next door and in his usual gracious way, he was happy to let us in. It's looking good!

In the past, David and I had commissioned several of his paintings, and yesterday he gave me the working drawing for one of them. Although it's just a sketch, it's definitely suitable for framing, and since David has the original of that one, I'm thrilled to have it.

From there, we continued to Arcadia because I wanted Sarah to see Pops, and also because I wanted to view the much talked about billboard that arose next to the historic Round Barn, blocking photos from one direction and causing much controversy. At Pops, we arrived at the same time as two large buses filled with elementary school students who had apparently been dropped there to buy pop to drink with their packed lunches on a field trip. The irony of this was not lost on us. Aren't we supposed to limit our kids' consumption of soft drinks? Hmm.... At any rate, it was teeming with kids, thus almost impossible to enjoy. 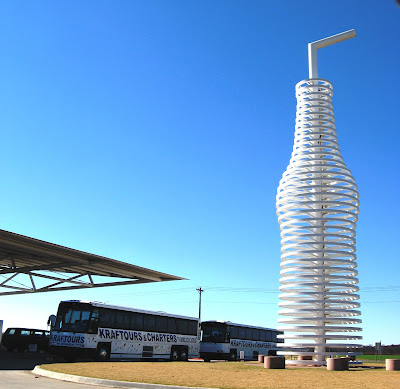 Loved this "snaky" car in the parking lot of Pops. 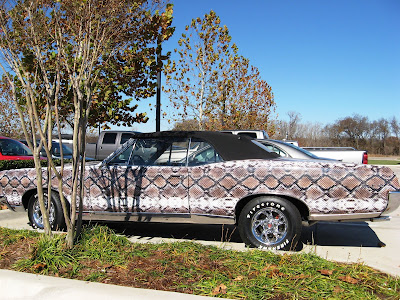 Here's a photo of the Round Barn and the billboard. It is a shame that it spoils the whole ambience of what's considered a historic site, although it's not as obstructive as I'd imagined it to be. The jury is out as to how the problem will or will not be solved. Stay tuned. 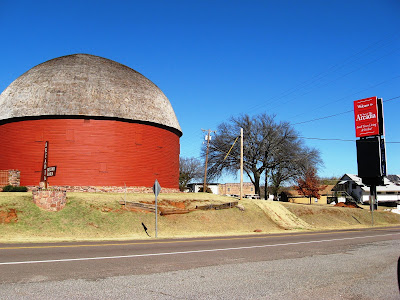 I took Sarah on a ride on the little segment of original Route 66 pavement outside of Arcadia. 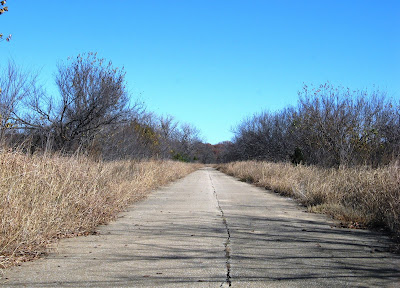 Because our timing basically stunk, it was now too late to drive all the way back to the Rock Cafe for lunch, so instead we stopped at Dan's BBQ in Davenport and indulged in some mighty fine ribs. 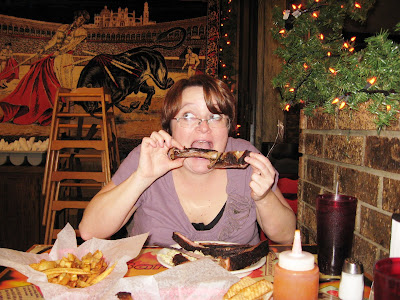 On the way home, we also drove around Luther, DePew, and several other Route 66 towns. And this morning, I put Sarah on the plane to go back to Chicago. Boo hoo!
Posted by Laurel at 1:36 PM

If I had known you were coming I could have taken a day off and showed you around.

Did you see the ruins of the Rock Of Ages Gas Station? If so, did you stop and read the plaque in front of it?

Glad you took her on some of the old road :o)

That would have been fun, Trevor, but we didn't know we were going there until we got there! LOL! I love the old rock gas station, and remember it from some of my very early Route 66 trips. But I can't remember what the plaque says, or maybe I never read it.