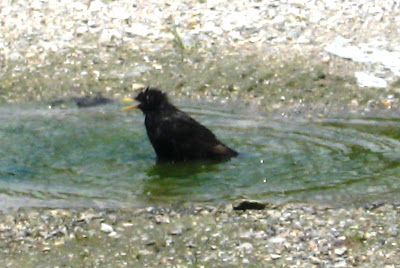 As you may recall, what we like to call Lake Afton is located about 10 feet from Afton Station's portico. The birds bathe in it, and no matter how severe the drought (such as the one we had this summer), the little pool is always full.
Last month, the town did some digging to find a source of the water, but they gave up after going down several feet and just left this muddy mess behind. The next day, Lake Afton was back. 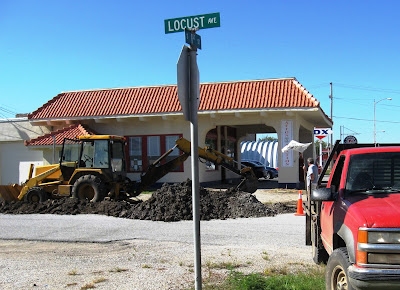 Besides it being as irritating as hell (since cars pulling through the portico unavoidably drag mud up to our front door) the source of the water has become quite a mystery to all of us. But in last week's local newspaper, I read a story that might shed some light on that source.

Evidence of a 3000-year-old spring was found in Afton in the mid-19th century and was first used as a watering hole for cattle drivers and cowpokes. Exploration of it's depths uncovered a wealth of prehistoric goodies. Those items included 18-inch mastadon teeth and other animal remains, as well as stone-age arrowheads. There's even a very collectible arrowhead variety called the "Afton point" which was first discovered at the bottom of the spring and named for it. 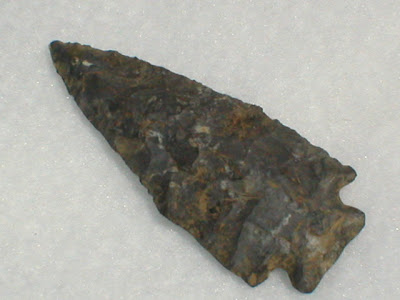 The Afton Spring had gained quite some fame due to the interesting artifacts found in it. The Smithsonian sent scientists and archaeologists to study what had been found on it's gravel bottom. They marveled at the collection of man-made items they found. The spring finally dried up during W.W.I when it was drained by the nearby lead mines which needed water to supply lead for the war effort.

The Afton Spring was 2 miles NW of Afton, which means it was probably about a mile from Afton Station but, in my fanciful imagination, it has reappeared at the side of my Station. Yes, I know this is a stretch, but I get a kick out of thinking it. It makes a muddy old puddle far more romantic, don't you think? David opinion is that it's just a broken subterranean pipe, and he's probably correct, but I like the spring theory much better. So there!

If it were a broken pipe, then that should have been found during the dig.

However, that is still the most logical explanation.

That story about the spring is fascinating!
On my Dad's farm, up near Wann, there is a perfectly round spring cut into the creek bed. In that same area we found lengths of copper tubing, a lock-n-chain, an old shovel, and other artifacts from a moonshine still that once there.