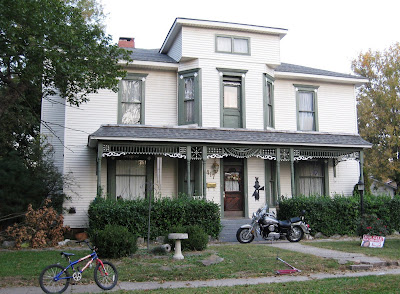 How's this for an anachronism? This is the W. L. Trott House in Vinita, a couple of blocks off Route 66. I went looking for it this morning on the way to Afton after reading about it in an interesting article on regional history in a local newspaper. When I stopped for a photo, I was taken by the juxtaposition of the 1894 home and the late model Harley. The house is for sale. I wonder if the bike goes with it??? 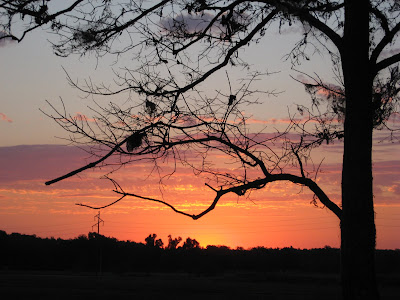 I was wandering back roads early this morning, and when I saw that the sunrise was going to be pink, I knew I needed a picture. Yes, another one. This was taken somewhere in Craig County, but I'm not sure where.
It's 10 a.m. and no visitors yet to Afton Station, which gives me some time to make magnets, work on the Sunday crossword, and watch the activity across the street, where a front loader/backhoe has been clearing some of the rubble from the collapsed building. It's slow going, and very very noisy. It also looks awfully dangerous when he crashes into those stone walls, but hey, what do I know? I took a chair outside and sat and watched for quite a while as the big John Deere decimated over 100 years of lovingly stacked rock which once held actual humanity, but now is dust and rot and probably some sweet memories. I don't know why I get emotional about this stuff. I need some visitors to get my mind off of it. 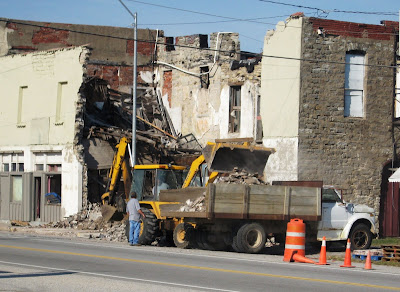 ____________
My wish came true! It's now 1:30 and there have been plenty of visitors, interesting ones, too. Friend and veteran road wanderer Jane Dippel stopped in on her way to another Route 66 adventure, this time all the way to California. Blog reader Michael Hathaway (Hi, Michael!) from Oklahoma City and his girlfriend came by in his cool '66 VW (original paint!) with friends from the Tulsa VW Club. 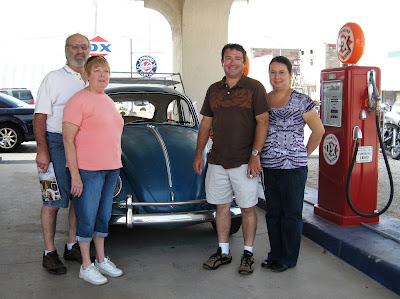 Michael is second from right.

From Groveport, Ohio came Harley riders Tony and Teresa Cote, who were advised to stop at Afton Station by their friend Mike Wallace (also from Ohio) who has visited here a couple of times in the past and apparently felt we were interesting enough to recommend a visit. Thanks, Mike! Tony and Teresa were on their way back to Ohio from the big H.O.G. rally that took place last month. 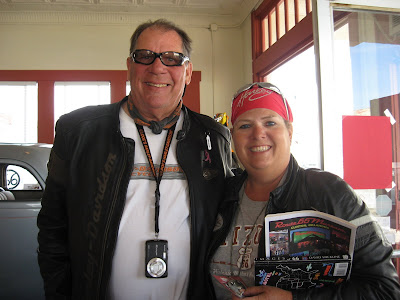 And there were more visitors later, too. Folks from Perry OK, Puyallup WA, and Albany OR rounded out another beautiful day on Route 66.