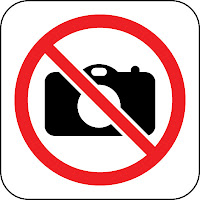 I mean, I didn't take any pictures today. In fact, this was one of those weird days where nothing really went as usual at Afton Station. Despite the fact that there were only 5 visitors, and only one of them was an actual traveler, the day seemed busy, although kind of disorganized.

The actual traveler was from Judsonia, Arkansas and is riding his motorcycle across Route 66 hoping to get as far west as he can by the weekend. Another really interesting visitor was in the area from Ballinger, Texas. When I saw his enormous ring as he was signing the guest book, I asked if it was from the Super Bowl. He said no, that it was from 1966, when Texas Western U. won the NCAA basketball championship. I said, "Oh, I remember that game well. You won over the school I was attending at the time, the Univ. of Kentucky. It was one of the worst days of my life!" He was astounded by the coincidence, but we got a good laugh about that.

Another visitor was my insurance agent, who happens to live in the area of Afton, and another was from a fellow from Missouri selling some really nice Route 66 merchandise. He supplies a popular Route 66 map I've been wanting to stock, so it was a good visit.

David, Marly, and Kenny worked on the new showroom (yes, finally back to work on that), and Betty came to visit toward the end of the day.

And thus my excuse for not snapping a single picture. Busy day, productive day, happy day. . . but I'm still not sure what I DID all day!