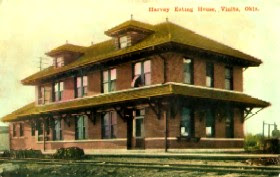 I don't know how this got past me previously, but I just found out that Vinita had a Harvey House! Harvey Houses were attractive restaurants, known for their excellent service and food, that catered to railroad passengers in a number of cities along rail lines of America and are considered America's first chain restaurants. There's a wonderful article about the Vinita Harvey House this week in a local newspaper called The Grand Laker. Apparently it wasn't one of the larger Harvey Houses, but it did exist as a restaurant next to the railroad tracks from 1907 until it closed in 1926, the birth year of Route 66. During the early part of the 20th century, about 20 passenger trains came through Vinita each day, but that tapered off as auto travel became more efficient and popular. In 1983, the building was torn down. The article is quite lengthy , but eventually I will try to make it a bit more concise and publish it here because it's filled with interesting information.

By the way, the Vinita Harvey House was at the corner of Wilson St. and Illinois St., which was Route 66. The piece of land now holds the Vinita City Hall.
Posted by Laurel at 4:20 PM

Too bad it's gone now. It would be something else to see there.

Starting to get cold now, unfortunately. I still have some road-trippin' to do.