The crisp, sunny morning , coupled with the fact that David put the crowd-pleasing '65 Chevy Super Sport convertible out in front of the Station, elevated my hopes that today would be blessed with lots of travelers to keep me busy. It's been such a long, dry spell at Afton Station. Surely it will end soon.

I've been spending the morning shuffling through some old notebooks I had here at the Station and found some of my writings from quite a while back. Tomorrow, since I won't have much to report, I'll post a short essay I wrote when I first came to Afton.
____________
Well, there has been an abundance of visitors today, but not the tourist kind. Tattoo Man was first to arrive, followed closely by a woman from town who stops in every now and then. She's quite the chatterer, so she was still regaling us with stories of her family when Betty arrived. Then Betty's son Harold stopped in and no sooner had he arrived than an elderly gentleman from town (son of the people who once owned the defunct Palmer Hotel across the street) appeared. He had seen Harold's hay truck parked in our driveway and asked him if he'd assist him in moving a few bales of hay. This was becoming Old Home Week at Afton Station. David remained all day too, working on cleaning up his workroom. Near the end of the day, a trucker from Chicago came in to look at the cars. There seems to be an abundance of truckers visiting this year so far. 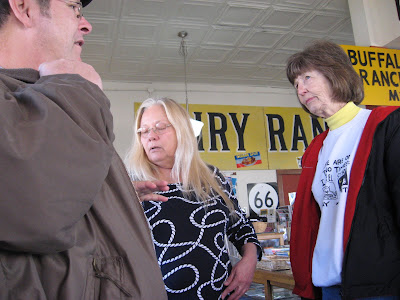 Tattoo, Mary Margaret, and Betty
_____________
I found a new place for breakfast this morning in Claremore. I didn't stop, but will do so later in the week. It was never open for breakfast before, but it looks like a great little mom 'n pop type cafe. This pic was taken without flash, in the dark. Please excuse. 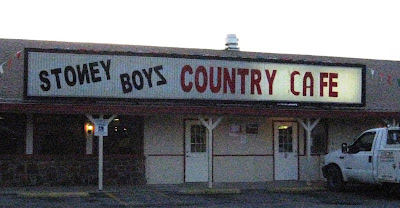 Betty brought me these roses for my birthday, which is tomorrow. Pretty, aren't they? 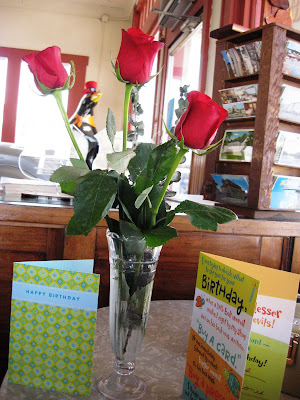 Laurel, Robin and I also want to wish you a Happy Birthday and many more to come on Route 66.

Thanks so much, Trevor and Bob! I always feel like I'm too old to celebrate birthdays, but it's still lots of fun!

HAPPY BIRTHDAY and see you later for dinner out. BTW, I've arranged for the wait staff to sing for you! Hahahaha!

Ron -- Hah! If we eat in the bar, there's just that one waiter, and despite him being quite gorgeous, I doubt he can sing. LOL!