It has been brought to my attention that Ron's snowman (featured in yesterday's blog post) bears a resemblance to Mr. Bill. So I made the comparison myself, and I'm convinced. I think it's the expression in the eyes and flailing arms. . . a combination of fear and amusement. 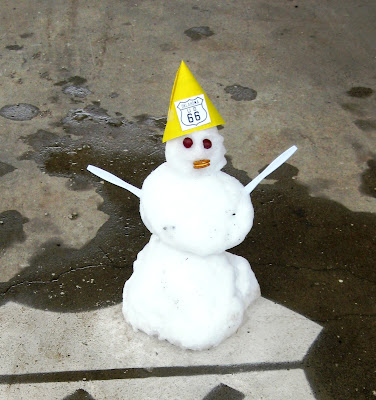 In further snowman news, I am proud to report that he was featured on the 6 a.m. news/weather report this morning on KJRH-TV, our local NBC affiliate. I sent them the photo, and they chose to show it on the air. Unfortunately, however, they completely ignored the fact that it was on Route 66. That's a shame, because I sent it in to get a little publicity for the Mother Road. Well, at least the shield was prominent in the on-air picture.
Posted by Laurel at 1:34 PM

I just want to comment on the fact of the snowman being kissed....
Have you never heard of "kissing the blarney stone?"
Well, then there you go. Sounds like good luck to me.