Every now and then a person will have one of those "aha" moments (or perhaps they're called "OMG" moments in the digital age). I happen to have them quite frequently, and this morning was one such moment. There I was, driving down Old 66 somewhere between Chelsea and Vinita, on the same route I travel multiple times each week, and suddenly the "aha" bonked me so hard on the head that I stopped the car dead in its tracks (which, by the way, is no big deal, traffic-wise, on Old 66 at 7 a.m.).

I looked around me. Dry, dead winter pasture land, no particularly spectacular terraine, nothing much really. But, here I was! I was in Oklahoma! Yes, I really truly was! Even after almost 10 years here, I still get crazy chills when I realize that I'm no longer stuck in southern Connecticut, that THIS is a place where not every little piece of land has been built on, improved, haggled over, paved, "artistically" landscaped, infused with auto emissions, and then scoffed at if not aesthetically perfect. No, this stretch of Route 66 is a whole lot of nothing, unless of course you happen to like big skies that you can actually see, wide open spaces, and the aura of distant drumbeats of long-vanished Plains Indians. I'm one of those who happens to think that this is just the most wonderful place on earth, and yes, I still have to pull to a stop in the middle of the road sometimes and pinch myself to realize that I'm actually here. Oklahoma needs to put me on a billboard, because if I'm not it's biggest fan, I don't know who is. And Route 66? How can I not worship the road that got me here?
__________
I pulled into Afton Station at 9:30, right at opening time instead of my usual 45 minutes early. I took my time getting here this morning, savoring all those "aha" moments. There's the all-too-familiar chill in the air and I'm shivering in front of the space heater until the big heater renders this big room manageable. I see from the guest book that David had some people from Waukesha, Wisconsin stop in yesterday. I hope I have a few visitors today.
__________
I'm home now. As the morning wore on, Tattoo Man arrived sporting his new and very elaborate tattoo tribute to Bob Waldmire. 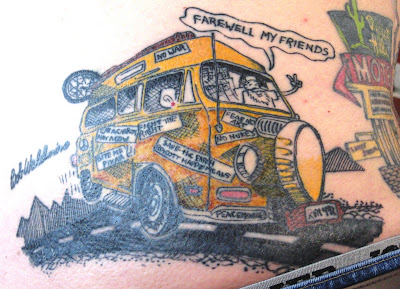 Betty followed closely behind. And then we had visitors! Yes, visitors! The first was a man and son from Anderson MO, his other son from Bartlesville, OK, and son's friend from Grove, OK. Later, a family of four that just moved to Miami, OK from Warner Robbins, GA came to visit. They're spending the weekend exploring their new home state, concentrating on Route 66. I loaded them up with guide books to help with their travels. Another visitor was a man who's visited before, a fellow postcard collector from Seneca, MO who traded me some great little leather datebooks for a handful of postcards. Another gentleman, Johnny from the Afton Public Works Dept. (actually, I think he IS the Afton Public Works Dept.) came in to bring me a great old 1931 magazine he found. It has some beautiful car ads in it, including a Packard ad, and some interesting editorials about coming out of a depression which have some relevance for today's economic conditions. It turned out to be a great day! 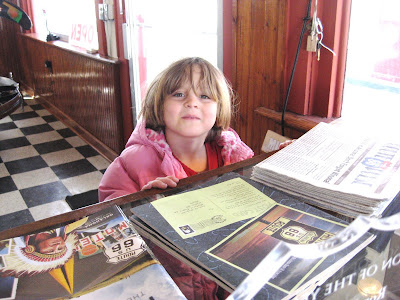 Here's one of today's visitors. I thought her name, LaStarza, was interesting, and she was a sweet little girl.
Posted by Laurel at 4:32 PM

I had the same/similar experience when I got down off the train in Amarillo, and could see 360 degrees under a full moon. I was there for three months of training to be a single engine jet mechanic courtesy of the Air National Guard. When I got back to my old job in Danbury, Connecticut, I only lasted two weeks before I enlisted in the regular AF. Got sent to Sioux City, Iowa, where the view was similar but working outside with the wind blowing hard directly from the north pole wasn't at all like Amarillo.

Once again the fates smiled upon me and each of those four years my squadron went for a month to Yuma, Arizona, where the view was 360 degrees like Amarillo but you could see who-knows-how-far away mountains. Now in Congress, Arizona, where there's plenty of space and mountain views; not to huge as Amarillo or Yuma, b but it's only four hours to the Grand Canyon and the red-rock world of southern Utah. Again somewhat similar to Afton as after visiting Afton Station last fall I took in Palo Duro Caynon before heading back to Arizona on US60.