Just call me impressed by the number of visitors at Afton Station this weekend when I was anticipating, basically, none! This is undeniably not traveling weather, and yet folks are out and about. I've been open for 25 minutes at this writing and have already greeted 5 visitors. A couple from Dallas, Texas on their way home from Missouri were at the door when I arrived. Right on their heels were a grandma and grandpa from Summit, Arkansas with their 4-year-old grandson. I held my breath through their whole visit. The little boy, clearly hyperactive to the max, ran around screaming the entire time. Attempts by grandparents to calm him were met with some good doses of kicking and biting. Whoa! Fortunately, Afton Station was still intact when they left. Not sure about the grandpa, however.
___________
Tattoo Man surprised me by arriving around 10:30 with his new partially-finished Bob Waldmire tattoo. It will be completed next week and he asked me not to post a photo until I can show the finished product. It's very nice!
____________
Tattoo left around 1 p.m. We had two more visitors when he was here, a couple from Big Cabin, Oklahoma. Soon after Tattoo left, Betty W. arrived, stayed with me for a while, and helped me close up when I decided to close 45 minutes early. Since it's Super Bowl Sunday I suspect people will be hunkering down in front of the TV all afternoon. I probably won't, but I might record it so I can watch the ads later. We're expecting more snow tomorrow (maybe 4-8 inches.... GRRRR!). With luck, it won't be around to keep me away from Afton on Tuesday.
David put higher output bulbs in the gas pumps, so now they are well-lighted during the day as well as the night. 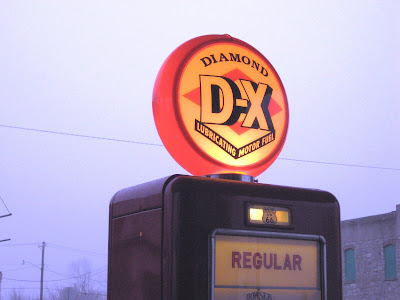 Ron M. took this reflection pic yesterday. In it, you can see the new yard flag made by Betty B. and available at Afton Station. It's very well-made, just like all of her merchandise. 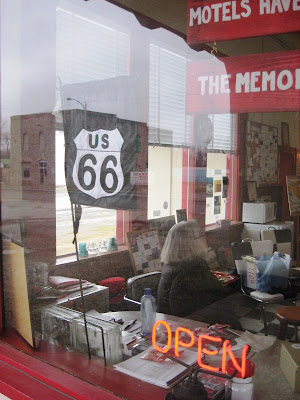 I am soooo glad I chose to be there on Saturday this week... The older I get, the less patience I have with shall we say "excitable" little ones.
You say such sweet things about my work. Thank you so much for sharing my items with your readers.
You are so informative about the happenings of this great state. Keep up the great work.

Only about 1 more month till it starts to warm up!

Oklahoma City is having yet another winter storm!