When the fog folds itself around my car, making me feel like I'm maneuvering inside a giant cotton ball, driving becomes somewhat claustrophobic, but nonetheless kind of fun. I'm naturally claustrophobic, as shown by my reluctance to fly, my need for natural light in every room of my home, and insistence that I take my treatments in the only room with windows in my dialysis unit. Today, heavy fog shrouded me, my car, and everything else as I drove down Route 66 to Afton. In a way, the fog is good. It proves that it's getting warmer. It's the first day in months that I haven't dreaded shivering through taking out the flags and signs. David brought me a more efficient space heater, but I'm not sure I'll need it today. Even so, I'm rooting for some sun.
__________

Right after opening I had a visitor, a trucker from Dunkirk, NY. He was driving an 18-wheeler flatbed with nothing on the truck except a motorcycle. I told him he really needed to get a smaller and more efficient bike carrier. :-) Actually, he was just returning home empty. I'm sorry to say, he's the first and last visitor I had today. True, it wasn't a very pretty day, but it's a weekend so I expected to be busier.

David and his son Patrick arrived almost immediately after I opened up, and they stayed until 2 p.m. We made some pressed penny necklaces, and of course Patrick "needed" some popcorn from the new machine. David took Patrick out and showed him how to drive the tractor. Not bad for a 4-year-old! 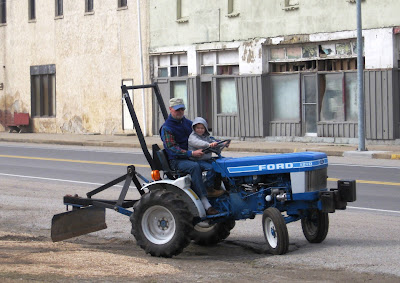 I had a call from the owner of Route 66 Vintage Iron in Miami. They're sponsoring a poker run for the Red Cross on May 1 and asked us to be one of the stops. Indeed we will! We love to host folks on poker runs. Fun!
_________

I stopped for breakfast at Clanton's again this morning, but didn't have the giant omelet this time. I sat right next to one of their photo walls, and managed to snap these two photos of the "old" Clanton's. Remember, it's the oldest family-owned restaurant on Route 66 -- one year older than the Mother Road itself. I was surprised to see that the old "EAT" sign has been there for so long. 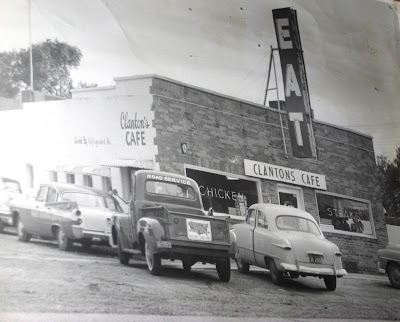 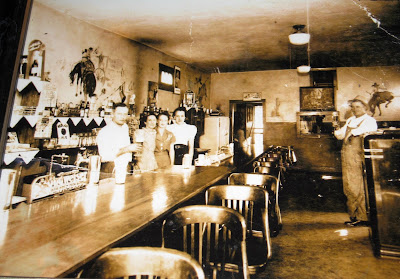 My homebound trip was through several small downpours but mostly just drizzle. More of same tomorrow, I'm afraid. I hope it doesn't keep the visitors away again.
Posted by Laurel at 5:26 PM

Love the pics of Clanton's. I didn't realize that it's the oldest family-run restaurant on the Road!