Was it something I said?

I know I have a few faithful readers, and even a few faithful commenters, and I appreciate those people more than you can imagine. However, I've been distressed in the past couple of weeks by an approximate 25% drop in my readership, according to my Stat Counter. So of course that starts me to wondering if I've simply become boring, or perhaps too off-topic, or if maybe I've been offensive in some way. I'd love to know the answer to this so I can do some self-correcting. As winter approaches, there's not as much going on at Afton Station, so I've been filling in around the edges with other thoughts and observations. I try to keep them somewhat Route 66-related, but occasionally I stray. Is this a problem? Or, am I being too self-centered? I don't want this to be a ego-driven blog in any way that can be prevented. All I do is record my thoughts and activities that relate to my life at the museum. Or, perhaps everyone is off doing other things right now? Just let me know, please, if I'm doing something wrong. I'm feeling a little paranoid and would like to be critiqued.
____________

My Native American flute arrived in the mail yesterday, so this morning, while there are few visitors (actually, none!) I'm taking the time to start learning to play it. It came with an instruction book, thank goodness. I haven't played a wind instrument since 4th grade when we were all subjected to mandatory "song flute" lessons. But I just love the plaintive sound of the Indian flute, and I'm hoping that playing it will relax me. 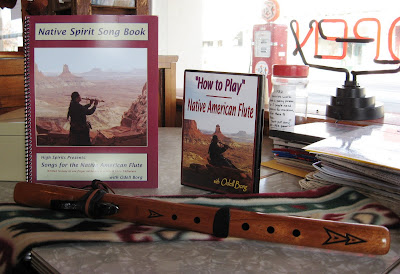 Meanwhile, at Afton Station. . . Tattoo Man paid a short visit this morning, but since we had no visitors, he left to go to an auction. As soon as he left, as often happens, the travelers started to arrive. I ended up with 15 visitors, which is really great for a November day. They were a couple from Pittsburgh, KS, five folks on motorcycles from Stark City, Springfield, and Fairview, MO on their way to a poker run around Grand Lake, people from Friday Harbor WA, Catoosa OK, and finally Erie, KS. The couple from Erie is doing some preliminary scouting for a motor cruise next spring, and we're on the itinerary.
__________
By the end of the day, I could get a few usable notes out of the flute. It came with a CD of songs recorded by Odell Borg, the maker of the flute and one of the best players in the country. http://www.highspirits.com/. I'm so mesmerized by his music that I'm already discouraged by my own. It's not as easy as it looks! But I can play the first three notes of "Inkpata", the first song in the book. It's a traditional Sioux melody. It's a start. :-) 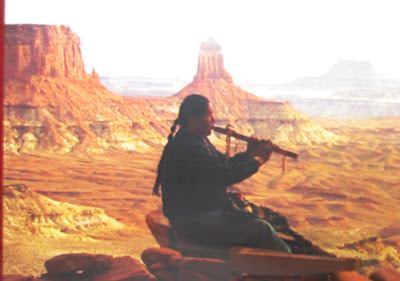 Picture on the front of the flute instruction book. I'd sure like to be playing there right now.

I admit that I do not click through as often as I used to, but that is not your fault, just only comment when I really have something to add. After a long work day, and as we all follow more blogs, it is time consuming.

In NO way is your blog boring, off-topic, self-serving or anything of the sort. In fact, I actually look at it more now than I did six months ago. It's just a case of developing the habit of checking it every day which I now do, just as I check Ron Warnick's Route 66 News blog. Keep it up and don't change a thing!

nothing you said.. my computer has Been down SO wasnt able to visit but Im up and running now! I enjoy your blog!:)

Blog traffic is a very random thing. I wouldn't get too wound up about it.

hey darl ... I read from a blog reader - so unless I come to comment - my reading probably doesn't count in your stats .. others probably do that too

hope you're having an awesome weekend !!

Per in Sweden said...

I love your blog, Laurel, and still read it. But as with other blogs, I haven't been commenting as much, because I was pretty much getting overwhelmed. I also use Google Reader, and don't always click through to the actual blog unless I want to leave a comment.

I have also noticed a bit of a drop in traffic on my blog. I don't know if it's the time of year, or what, but there does seem to be an ebb and flow in the blogosphere! I'll let you know if I ever figure it out. :)

I still visit your blog daily from here in NC...so I'm not responsible for your drop in numbers...tee hee.

I too play the NA flute..have been for almost 10 years! I have studied with R. Carlos Nakai and Mary Youngblood, so once upon a time I was where you are. Don't get discouraged! My tip to you is to make sure that the holes are completely covered (or else you'll squeak) and that you breathe gently into your flute, not blow.

Keep up the great blog...don't change a thing. And as R. Carlos says, "Just play!"

i read through a reader, I'm not sure if you pick those up... But trust me I read all the time!!!

I read it everyday. This, and Ron Warnicks blog, are two of my favorite Route 66 related blogs and two of my prime sources of news concerning Route 66.

There are some blogs I started off reading, and eventually dropped because either I got nothing from them, or they didn't update often enough.