A Horse To Ride!

Way back on Aug. 6, 2008 (when I was first starting to blog) I wrote about how some seemingly insignificant things one sees become emblazoned in the minds, thus those things, however unimportant, are sorely missed when they're gone. The item I mentioned was a truly unprepossessing sign east of Tulsa on Route 66 that read "Rent A Horse To Ride". I have never understood why the sign was such a memory for me, but when I discovered one day last August that it was gone, I felt an actual pang of sadness. The field was empty . . . no horse to ride. . . the pasture now sporting a "For Sale" sign. Well, today the sign has returned!!! And it's been cloned into about a half dozen of the signs surrounding the field. I'm happy! (Emily, you'll be happy, too!) 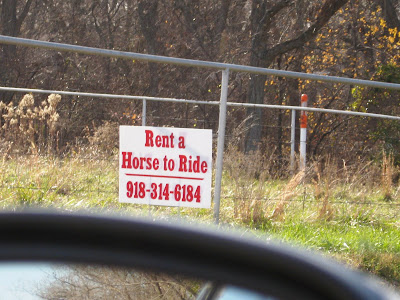 I drove up to Afton today, checked on the Station and found we'd had several visitors while I was not there, apparently hosted by either David or Marly, because there were new names in the guest book from Nebraska and Florida. From there, I drove to David's house in Grove to pick up the turkeys he fried for me and others. He's done this for me every year since we've been divorced. I watched him work the fryer for a while, but forgot to take a picture of the operation. From there I drove back to Afton to meet Betty and give her one of David's turkeys. On the way home, I delivered another one to Brad in Tulsa.

On the way to Afton this morning, I stopped to take photos of two places on Route 66 in East Tulsa that I don't believe I've shown here before. Here is an old fake wooden water tower shown on this postcard from the early '50s, when the building was a railroad-themed restaurant. Following is a picture of the old water tower today. It's still in existence, but now advertises a public relations consulting firm. 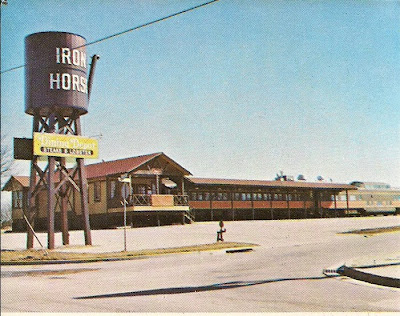 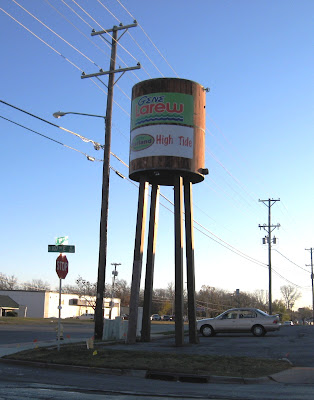 Here's an unremarkable building not far from the above water tower. It's obviously been abandoned for years. It would have completely passed my notice if an elderly lady hadn't approached me after Route 66 program I participated in in Tulsa several years ago. In her hand, she held a photo of the building when it was first built, and which she told me had served as her parents' grocery store for several decades. She said she hadn't seen it for years, so I took a photo of it and sent it to her. In return, she sent me a picture of the building when it was a vital business. I seem to have misfiled the photo, but when I find it, I'll post it here. 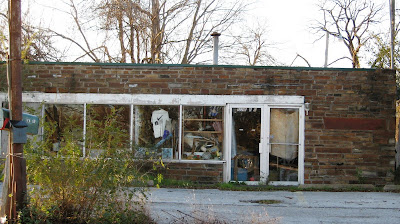 I got home around 3 p.m. and have spent the rest of the day in the kitchen. Thanksgiving tomorrow! Hope it's a good one for all!

Have a great Thanksgiving.

We saw the horse sign a couple of weeks ago. We're actually thinking about heading out there tomorrow so I can go riding if the weather isn't too terrible. I haven't been on horseback in years. Here's hoping my leg muscles haven't gotten too barn sour since my last ride....

Some people rent horses to make some money and it has become a very profitable business I'm going to have to buy a couple of horses balance my financial situation.