I must have needed a good cry this morning, because I decided to leave home early and drive up to Picher and Cardin to have a look around. Those who are regular readers of this blog know how I feel about the plight of those two towns. On this beautiful morning, there were no sounds other than the chirping of birds as I drove around the streets of Picher. It’s like paying a visit to the surface of the moon, or maybe the surface of the moon in 3010, after we’ve colonized it and then abandoned it. I took lots of pictures, but won’t put them up here until tomorrow, at which time I’ll talk more about this sad, sad place.

I have to meet a bus tour at 4:45 this afternoon, meaning I won’t get home until around 7 or 7:30 this evening, It’ll be a long day, especially if I have very few visitors.

David picked up the stanchion and giant D-X sign yesterday and I just went around back to have a look. It’s HUGE! The pole needs to be de-rusted and painted, but the sign itself is in great shape. We’d planned to use the older sign, which we’ve owned for quite a few years, in the stanchion, but the frame dimensions are slightly different, so I guess we’re stuck with the newer sign (which doesn’t have the dash between the D and the X) until we can figure out what to do about it. Anyway, it will be quite a project to erect it. Try to imagine a great big ’ol sign like those in front of modern gas stations.
__________________

Tattoo Man came to stay for a little while in the morning, but our only morning guests were a nice young lady from Tulsa, followed by a trucker from Morrisville, MO looking for some Packard information. I might have to wait for the bus tour to come and break the monotony.

A couple of bikers from Rogers, AR just stopped in, fresh from having their seat covers stolen during their five-minute stop down at Buffalo Ranch. Not a great welcome to the fine town of Afton, although at the Buffalo Ranch truck stop it could have easily been pilfered by an out-of-towner. Even so, they’re starting a 3-day trip and it’s not a great way to begin. 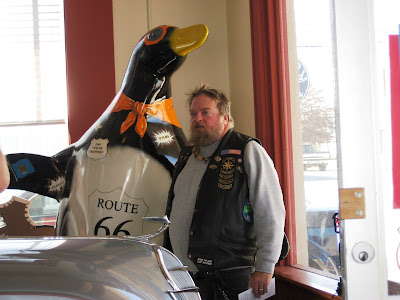 We don't usually see big burly bikers pose with Tripper. I like this guy!
Later, a gentleman from Tulsa visited and took some photos of the cars, and then friend Mike Pendleton stopped by to exchange Route 66 gossip -- always a pleasure to see him. So now it’s 2:45, and thanks to some lovely visitors and some wonderful DVDs (which I’ll explain tomorrow) the day has gone very fast. I’m also cheered by the fact that the guy who was given the old abandoned building across the alley from Bassett’s has been power washing the front all day. I was so afraid he was going to tear it down. Looks like we’ve convinced him to let it remain.

The bus arrived right on time, so I was on the road toward home by 5:15. I took the interstate (ugh!) just to make time. There were 52 people from the Tulsa area on the bus, including a few who recognized me from some speaking I've done in Tulsa and one who knows Ron M. from his teaching days. They arrived on this beautiful "Time Tours" bus, which looked neat with the reflection of Afton Station on it's side. 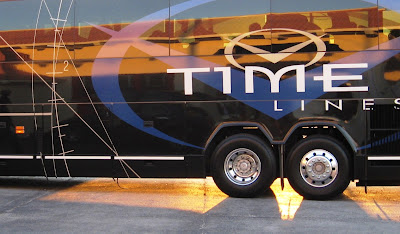 Why are there only women in this picture? Because all the men on the tour are still in the back drooling all over the cars. It happens every time! :-) 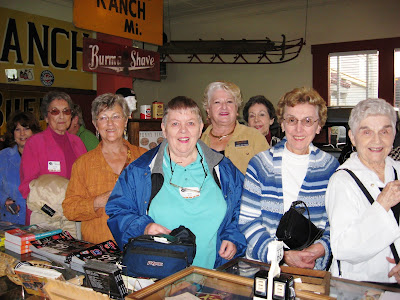 The women in the front while the men are drooling over the cars. Well, ya know, every mans dream home is a $10K house with a $100K garage.

I'm sorry those bikers had such a bad start to their cruise. I hope the thieves get caught.