I'm not one to give a eulogy before the fact, so I'll just mention that icon of Route 66 (and my friend) Bob Waldmire has received the news that he has terminal cancer. He visited Afton Station just last month when he was heading to Springfield, IL, his family home, to spend his last days exactly as he wants to spend them. Tattoo Man went up to visit him last weekend and reports that he's resting comfortably in his beloved school bus home. I'm sure I'll report more on this in future posts, but for now I just want to say that Bob is one hell of a great guy and I pray that his days will be painless and filled with the comfort of friends and family.
Bob will be having a show of his art, in an attempt to divest himself of all of it, on Nov. 22 at the Cozy Dog in Springfield, IL. 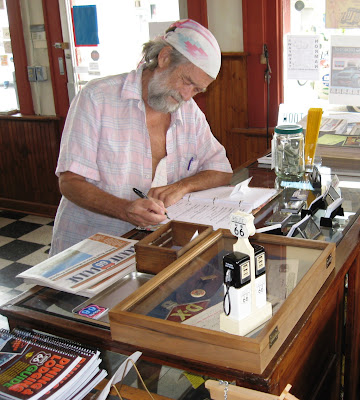 Bob sketching in the Afton Station guest book on Sept.8, 2009
Bob is an incredible artist with a style all his own. Here's one page of a huge, detailed birds-eye-view map of Route 66 which he drew. 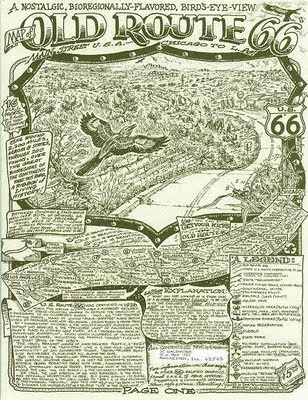 __________________
Update on my Halloween horror: Shortly after I got home from dialysis this afternoon a nice looking young man rang my doorbell and when I went to the door he said "Um, Ma'am, I think I may have scared you to death on Friday night". Uh, yes, that is putting it mildly. Well, it turns out he's my next door neighbor! They just moved in a couple of weeks ago so I'd never seen him before thus had no way of identifying him. He was very sheepish and extremely apologetic. As I'd suspected, he was coming home from a law school Halloween party and was stinkin' drunk, came to the wrong house, and he said that's all he remembers. He woke up in jail a few hours later and now he has to face a judge, whom the police said will probably give him community service. He's a law student so he's a little worried about the incident going on his "permanent record". I'm convinced that he's really a nice person. I told him he might want to lay off the booze from now on, because if I'd had a gun, he might be dead. Oh, he dropped his entire set of keys in my yard that night. We found them and he was very grateful for that. I didn't bother to tell him about the language he was using while he was throwing himself against my door. Case closed!
Posted by Laurel at 3:11 PM

Lord God, our Heavenly Father, please lay Your Healing Hands on our friends, Bob Waldmire and Laurel Kane. Make their bodies whole again.
In Romans 8:28 You promised that "All things work toward good.", so we Thank You that You will bring some good from this.

We Pray this in the Name of Jesus Christ.
Amen

Sad news about Bob, good news that it was a neighbor.