Morning rain gave way to sunshine as this fine Saturday wore on. Frankly, I wasn't feeling very hopeful for a scintillating day at Afton Station today, but it turned out to be just fine. We only had 7 visitors, so Ron M. and I did have some time to pursue other activities, mainly figuring out what happened to totally screw up the Afton slide show I had just about perfected last week. Ron feels that I may have forgotten to save some elements of the slide show before I signed off after working on it. Or, it could be something else. At any rate, we got it back on track, although I still have some tweaking to do. When it's done, you'll be the first to know.

Our visitors today weren't all locals. Yes, people are still traveling on Route 66, even this late in the year. Wouldn't it be wonderful if the "tourist season" on Route 66 lasted all year round? Maybe this will be the year. Travelers came from Stafford VA, Rockwell TX, West Allis WI, Washington D.C., and Pryor OK today. 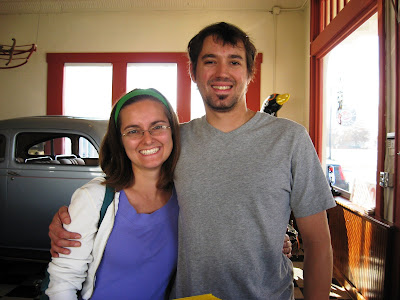 This young couple from D.C. stopped in on their way across the country to put down roots in Los Angeles. They've been trying to follow Route 66 as much as they can. They're both actors and are seeking to pursue their craft where it's more marketable than in the D.C. area. We'll look for them in a few years when they're accepting their Academy Awards!
For a book he's writing on ghost towns, a friend asked me some questions about the carriage company that was once in Afton, so I asked Ron to take some pictures. The building is still standing and happens to be the building that until recently housed Bassett's Grocery. It's now empty, like most other buildings in town. I know I've shown this here before, but here it is again. Except for a short time on Wed. morning when I drive up to pick up my annual fried turkey from David (since he got the turkey fryer in the divorce, he makes a turkey for me every Thanksgiving!), Afton Station won't be officially open again until a week from today. There might be someone there, however, so if you pass thru town, look around for a car or truck and you might get lucky. I'll be posting here periodically, however. You can't get rid of me that easily! :-)
Posted by Laurel at 5:34 PM

Love the deep fried turkey. My ex-brother in law gave us one, we have not used it yet, but will next spring/summer :o)

Have a Blessed Thanksgiving, Laurel.

I've never tried fried turkey. I love fried chiken, but, I'm afraid if I try turkey, I'll like it too much. And, at 43 years old, I figure I need to start watching what I eat more.

Trevor,
It might cheer you to know that you can fry a turkey and not worry about calories or cholesterol, at least not as much as roasted turkey. The quick-frying process (in peanut oil) keeps the bird from sitting around in it's own fat-filled juices, and it ends up being healthier than roasted turkey. But of course, you have to invest in all the equipment to do it. It's a lot of work, but the turkey is done in about 1/3 the time of oven roasted turkey, and it is WAY more delicious!
Have a wonderful Thanksgiving!