The Sound of Silence

A few days ago I suggested you check out a Hulu video entitled “The Creek Runs Red”. Hulu - Independent Lens: The Creek Runs Red - Watch the full episode now. I would love to be able to make it required viewing for all of my readers, but somehow I don’t think that would work. However, for those of you that can spare an hour, I highly recommend it, particularly if reading my blog has sparked your curiosity about the county in which Afton Station sits. Picher is about a half mile off Route 66. [One important note, however: The documentary was made in 2006, prior to a tornado that wiped out just about everything you’ll see in the film. There’s basically nothing left in Picher or Cardin now. What the Superfund Site buyout didn’t take away, last year’s tornado did. That makes the story even more interesting.]
The documentary doesn't take sides on the issue of abandonment of Picher and Cardin, and I like that. I'm not even sure I've made up my own mind about the ongoing debate. I just know that a lot of people were faced with heartaches because of something that happened many years ago and never got fixed. The visuals alone, not to mention the interviews with folks from the towns, make it worth watching.
Yesterday morning I got up early to drive up to Picher and Cardin to check out the area once again. It’s about 20 miles up Route 66 from Afton, thus about 100 miles from Tulsa where I live. I just can’t seem to stay away, despite the despair I feel when I go there. The silence there yesterday was deafening, and there wasn’t a single sign of life other than the chirping of birds. I drove around for about a half hour and took a few pictures. At times, it felt like I’d landed on the moon. And whether you side with the folks who were grateful for the buyout so they could get their children away from the toxic environment or with those who flatly refused to leave their ancestral homes, the story is a moving one. After all, it’s about the death of two cities.
Here are some of the photos I took. 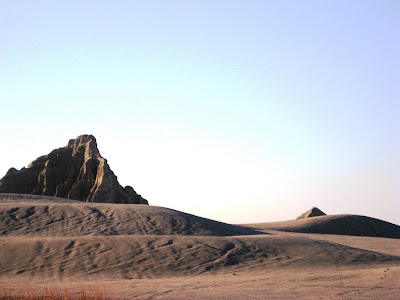 Is this the Moon, or is it northeastern Oklahoma? One of the many mountain-sized piles of lead slag left over from early 20th century lead and zinc mining. 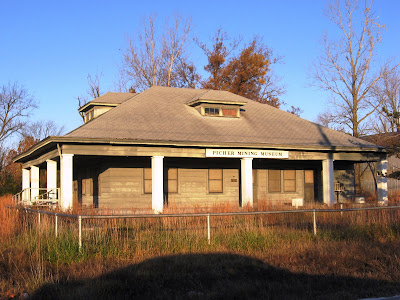 Picher Mining Museum, like everything else in town, is closed. 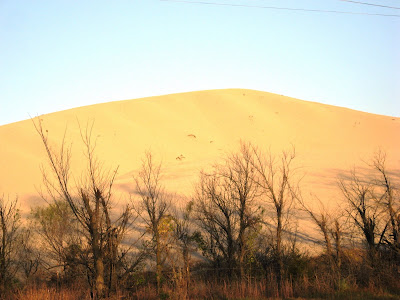 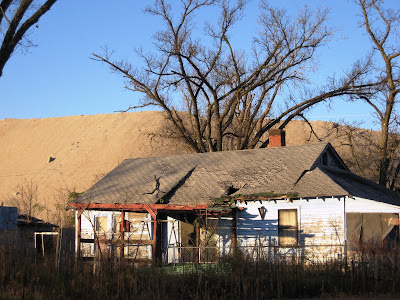 This slag mountain is literally in the back yard of this abandoned home. 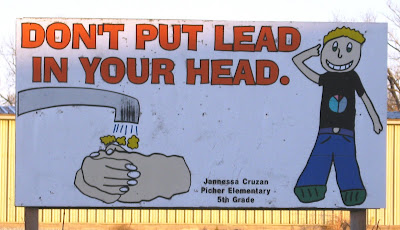 A warning to kids -- but there are no kids left here any more. 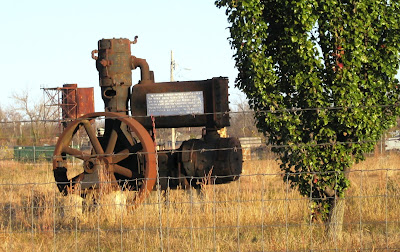 Homage, of sorts, to the mining past of Picher and Cardin. Plaque reads "In Loving Memory of Herschel B. Ellis who mined these mines for 30 years and was one of the last miners to be pulled from the underground while the water was coming up around his ankles as he worked to remove equipment. Wife and Family". It was a tough life even when the mines were in operation. 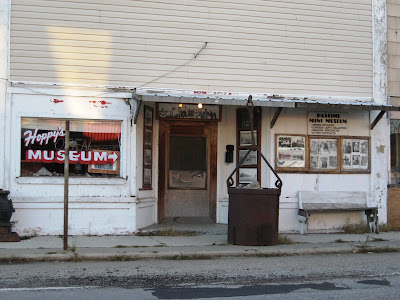 Hoppy's Museum and Pool Hall. Hoppy was one man who refused to leave. I thought his museum was still open, but it certainly looked abandoned yesterday. The bucket out front is what brought the ore up from the underground mines. 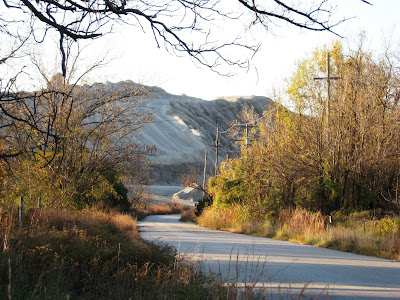 A winding road through the "mountains". Government signs said I shouldn't go there, but I went anyway. 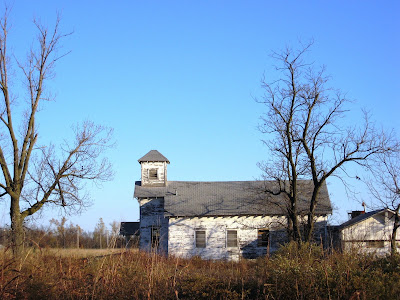 I could go on and on about this, and I have more photos too, but I'll stop now. Please watch the video. Thanks.

Almost looks like a scene from "Mad Max", or some other "end of the world" movie.

Curious about the location of the Church. What town or road is it near. Have a friend wanting to shoot video of an old church in a field. This fits the bill.

Pastor Richard -- It's just off Route 60-66 in Picher, Oklahoma. You can see it just northeast of the main road. However, it might not be there any longer. They are tearing down all the buildings in town due to the pollution from the lead mines. If it's still there, however, it would make a great photo. It's definitely out in the middle of nowhere.