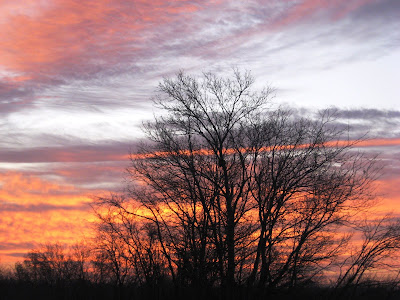 I’m finally beginning to figure out a few things. One such revelation happened just this morning. These are things I’ve probably known for a long time, but sometimes it take an outside influence to get them through my thick skull.

I subscribe to an online service, The Writer's Almanac ( newsletter@americanpublicmedia.org) that sends a bit of poetry to me each day. It’s not one of those sticky sweet feel-good sites, but instead it distributes excellent poetry by a variety of poets, most of them respected in the present or past. They’re not the type that end with “Send this to 10 of your friends and…” Like most good verses, they make one think. Some are disturbing, but many are uplifting as well. Today’s offering was:

The Sacred
By Stephen Dunn

After the teacher asked if anyone had
a sacred place
and the students fidgeted and shrank
in their chairs,
the most serious of them all
said it was his car,
being in it alone,
his tape deck playing
things he'd chosen,
and others knew the truth
had been spoken
and began speaking about their rooms,
their hiding places,
but the car kept coming up,
the car in motion,
music filling it,
and sometimes one other person
who understood the bright altar of the dashboard
and how far away
a car could take him from the need
to speak, or to answer, the key in
having a key
and putting it in, and going.

Although this describes a different time in a different life, it made me realize that my car is my “safe place”. Of all the places I go in the course of my daily life, I feel most secure and in tune with the world when I’m behind the wheel of my dear Chrysler 300. I felt the same about my PT Cruiser, and before that my Toyota Land Cruiser. It has nothing to do with make or model, or anything about the car at all. It’s just where I want to be. It’s a comfortable cocoon, it takes me where I want to go, and it serves as my window to the world. I guess it could be said that it also takes me away from the world, because part of my car’s charm is that it’s harder for people to get to me when I’m in it. Not very many people know my cell number, and I often just turn it off. Since I hate talking on the phone almost more than I hate celery, this is another of my car’s charms. Well, that. . . and power. I rule my car. I can tell it where to go, what temperature to be, and what I want it’s radio to play. And compared to…let’s say… a house, it’s very low maintenance. Maybe I should just live in my car. 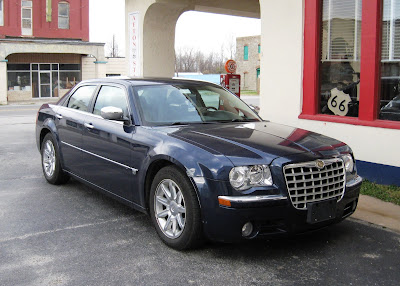 And speaking of Route 66 (was I?) my trip to Afton this morning was all about sunrise and cows. The sunrise was gorgeous, and so were the cattle. I had to stop to take a photo of these folks who were all gathered up against the fence as if planning to make a break for it. If they’d asked, I would have helped them. 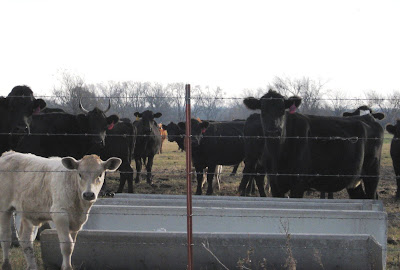 This morning, I went to breakfast at a place I haven’t been for at least a year. When I walked in, the amazing waitress said “Same table?” and remembered exactly where I liked to sit. Then she asked if I still wanted my two eggs over medium, rye toast, and a bowl of fruit. Sometimes I’m in such awe when it comes to wait staff and what they’re able to remember.

It’s afternoon now. Marly has come to work and Betty came to chat, and then other visitors showed up. A couple from Branson, MO stopped in, and it turns out he’s the well-respected artist of "American Highrise". You can read about him here: The America Highrise Foundation: AmericanHighrise.Com

There were also three ladies, two from Tulsa, OK and one from Monticello, MO who were taking a spin on a short stretch of Route 66 in Oklahoma. A couple from Greenwich Village in New York City, on a 6-week vacation on Route 66 and other points, came to visit us, too. The day ended with visits from a couple from Miami, OK and a young man who is staying with his aunt in Afton and just loves vintage cars. Ten visitors in all.
Posted by Laurel at 5:01 PM

Looks like a great car for your regular commutes :o)

"Here in my car,
I feel safest of all,
I can lock all my doors,
It's the only way to live,
In cars."

LOL Not too long ago I posted a video of Queen's "I'm In Love With My Car." It's so true...there's not much that feels better than cruising along on a sunny day! (Trying to get caught up on blogs...yikes!)

Both very appropriate songs! Thank you.

I believe I have your cell phone number. Does it end with 3829?