Except for some very unwanted trips to the hospital, I haven't been anywhere overnight for a couple of years. I decided the time had come, and although a trip just 200 miles from home isn't exactly an exotic adventure, I really wanted to attend the Oklahoma Route Association's 25th Birthday Party, being held in conjunction with our Hall of Fame inductions and a dinner meeting of the Board of Directors.  So, off I went for two days to Clinton, OK with Ron M., who is an angel for accompanying me, hauling around my wheelchair, and acting as Chief Navigator as I drove down Route 66.

I snapped a few photos at a few spots along the way, but those will come later.  First, I must comment that the Hall of Fame induction, held at the fabulous Oklahoma Route 66 Museum in Clinton, was wonderful.  President Brad Nickson gave a short speech that reminded us of the 25 years we've been together celebrating Route 66.  He introduced those in attendance who were charter members, those who were past presidents, and those on the current board.

Every other  year, two persons are inducted into the Hall of Fame, one alive and one deceased.  The deceased honoree  this year was J. M. Davis of the famous J.M. Davis Arms and Historical Museum in Claremore.  Although he passed away many  years ago, his influence on Claremore and on Route 66 remains.  He once owned the hotel in Claremore that opened its doors to Route 66 travelers long before Route 66 travel was popular.  He also had the world's largest gun collection which resides now in his museum along with other of his collected artifacts -- historical memorabilia of all types.  (See my blog post of 7/14/14 for more). Accepting the award for Mr. Davis was Mr. Wayne McCombs, Executive Director of the museum.  Here he is signing autographs. 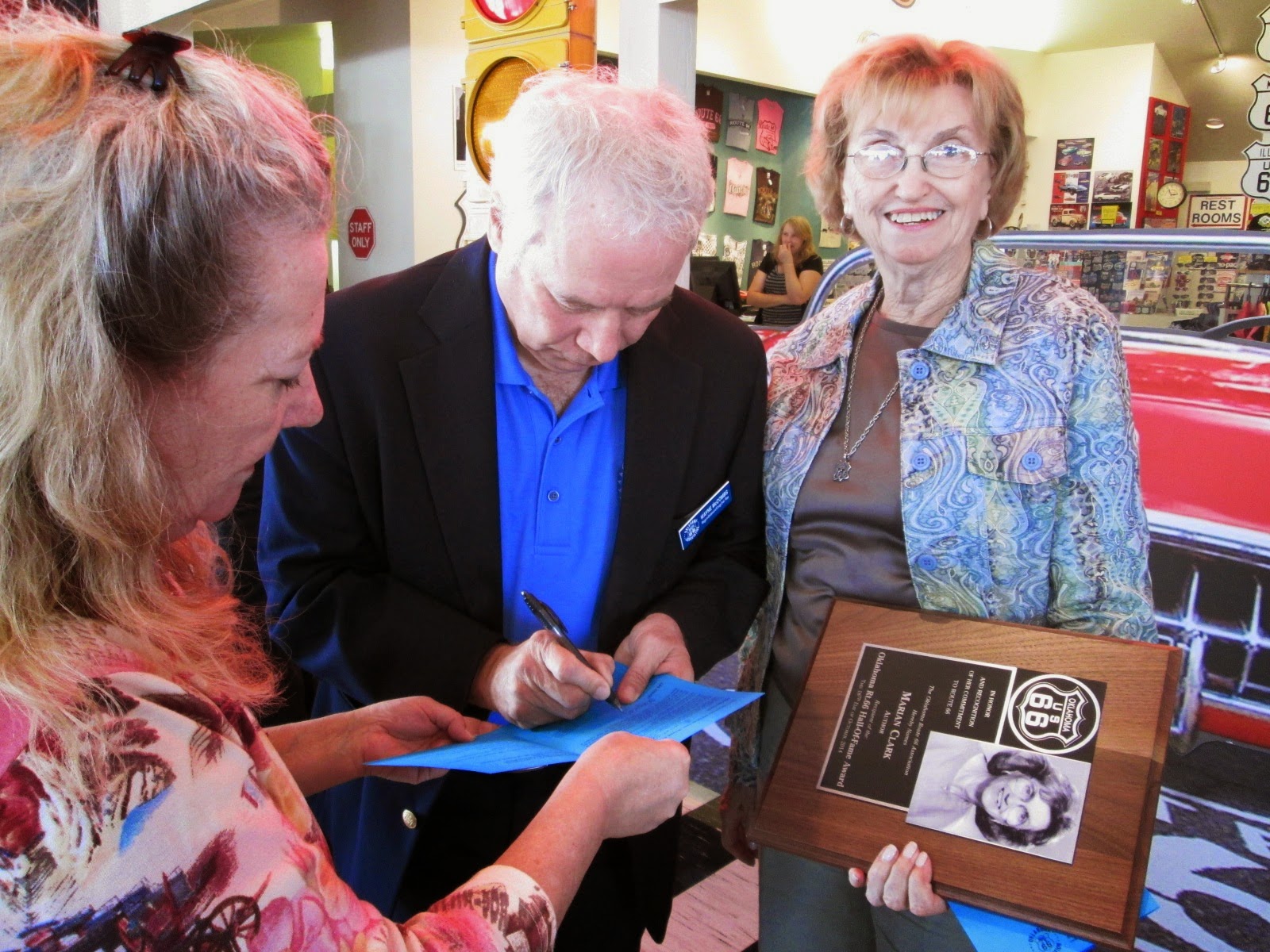 My dear friend Marian Clark was the living inductee this year, and she is uniquely deserving of the honor.  She has spent countless volunteer hours on Route 66 projects over the years and has written or co-written four  Route 66 cookbooks.  She is a charter member of the Association as well.   When she mentioned me in her acceptance speech it brought tears to my eyes.  I've done so little compared to the work she's done to promote the Mother Road.  Here she is being introduced by Brad. 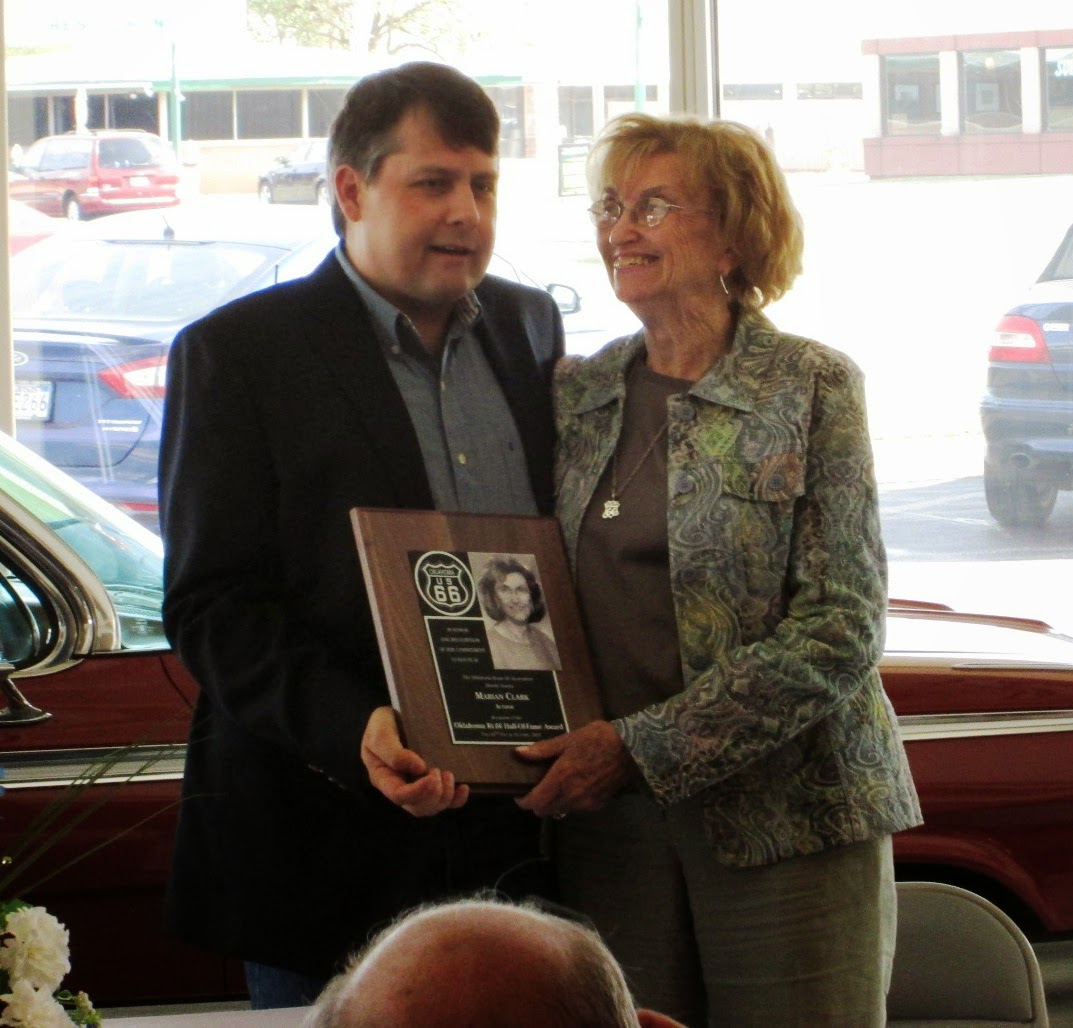 After the awards were given, Ron M. and I took a quick tour of the museum.  I hadn't been there in several years and during those years some major changes have been made.  It is an impressive museum and should be a "must see" for all Route 66 travelers.

We stayed at the brand new La Quinta hotel, which was lovely except for a few small problems.  I ended up sleeping in a chair all night since, in what seems to be the newest fashion, the mattress on the bed was so thick and so high that I couldn't get on it!  Being short legged and lame, I'm past the years when I could have taken a running leap and scaled the heights, but I can't do that any more.  I must say, however, that there was a perfectly comfortable chair in the room and I slept just fine in it.  I just wonder if I should get some money back for non-use of the bed??   Apparently the long-legged Ron M. did just fine with it in his room, as I'm sure most guests do.  Sigh....

On the way to and from Clinton, we stayed on old Route 66 most of the time.  That we got lost a couple of times is proof of how long it's been since I've traversed those roads in Western Oklahoma.  We did stop for a few snapshots, however. 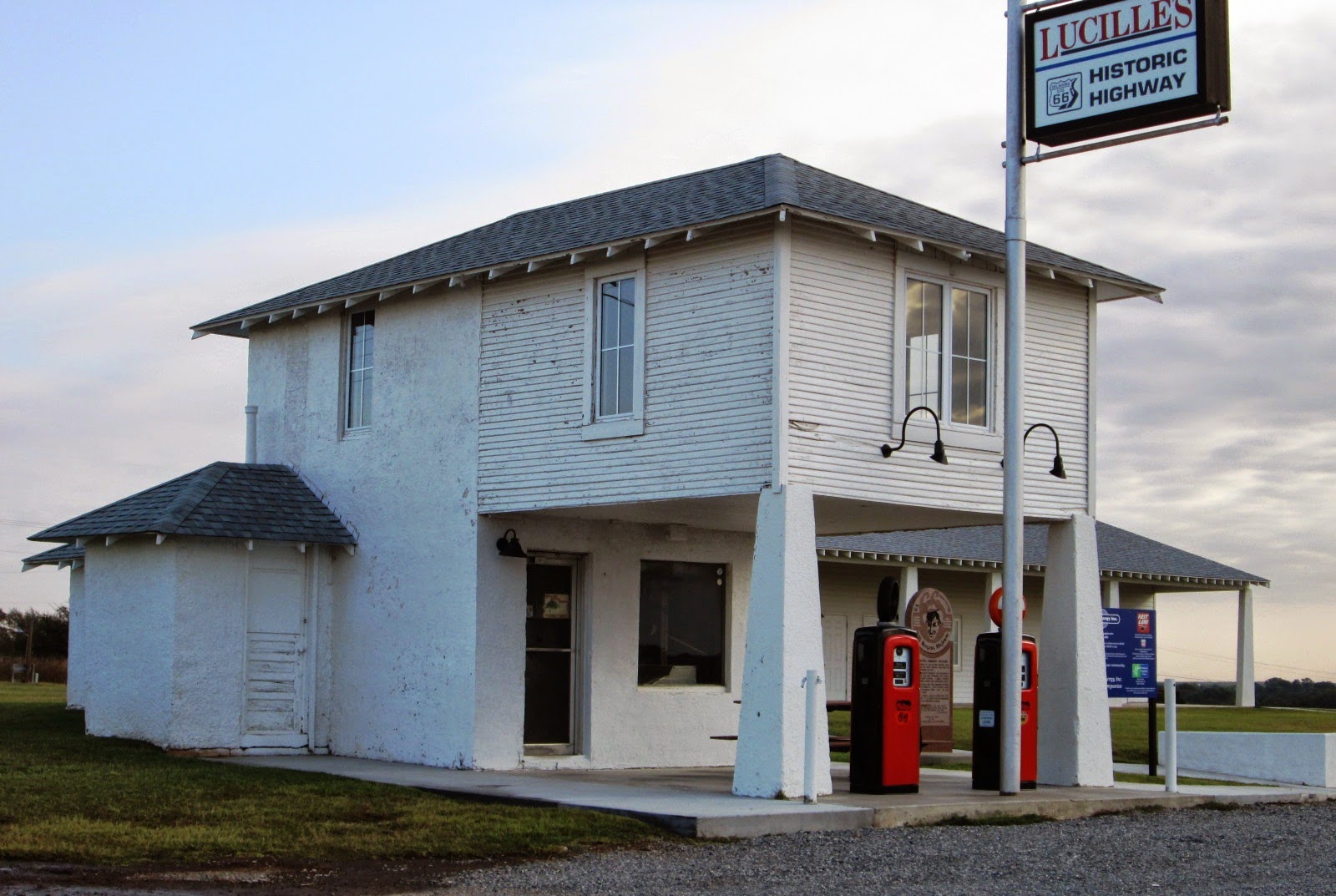 The famous Lucille's Roadhouse in Hydro, probably one of the most photographed sites on Route 66.  I know I have dozens of the shots myself, yet still couldn't resist just one more. Jerry McClanahan's gallery and studio in Chandler, OK.  It has a new, fancy paint job since I visited it last! 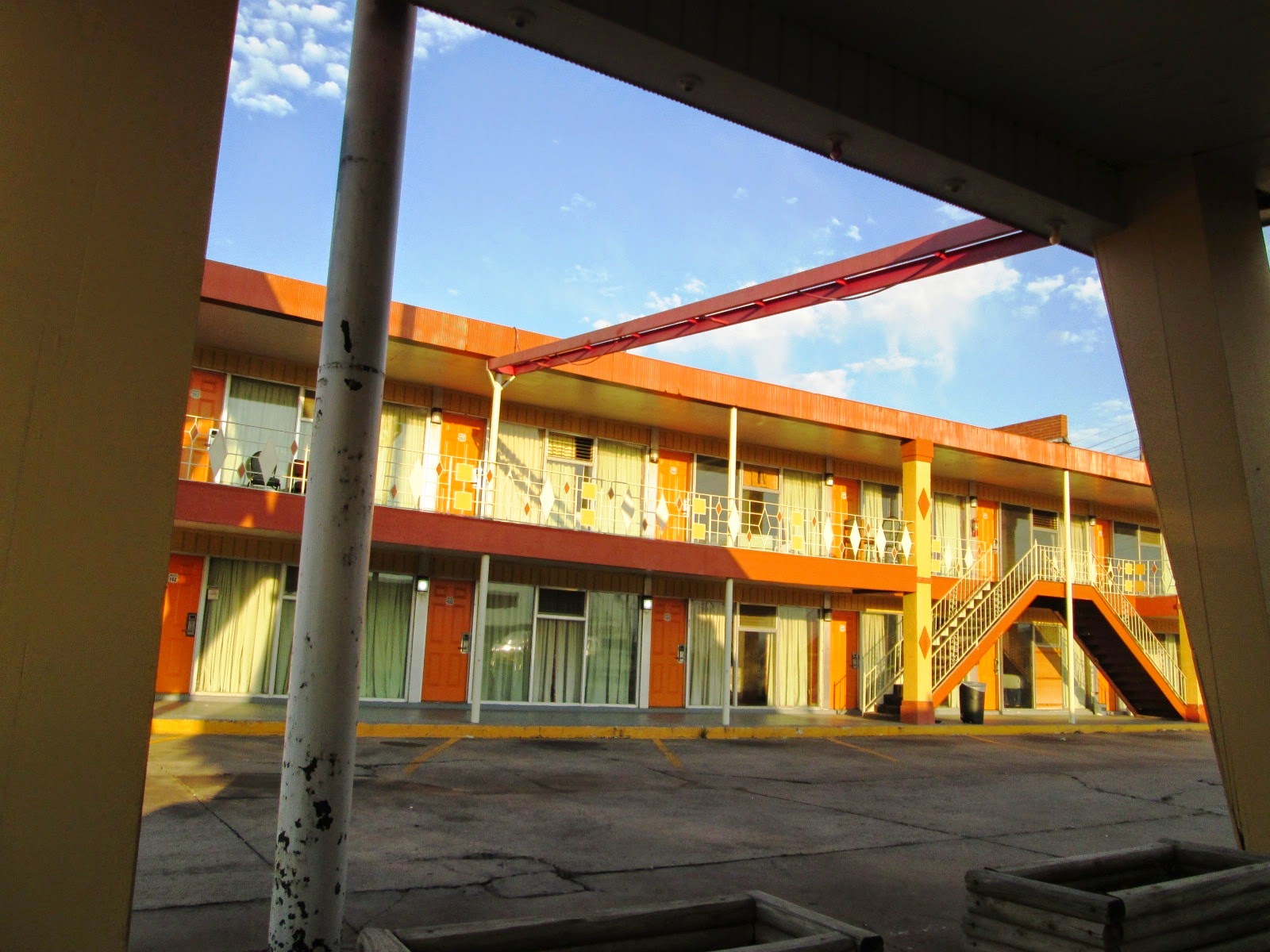 The Glancy Motel in Clinton always fascinates me.  The design, including the sign, has remained untouched and is still a great representation of "googie" architecture on Route 66, and yet the motel itself seems to have fallen into just enough disrepair to make it seem a little scary.  I truthfully can't tell if it's still open or completely abandoned. 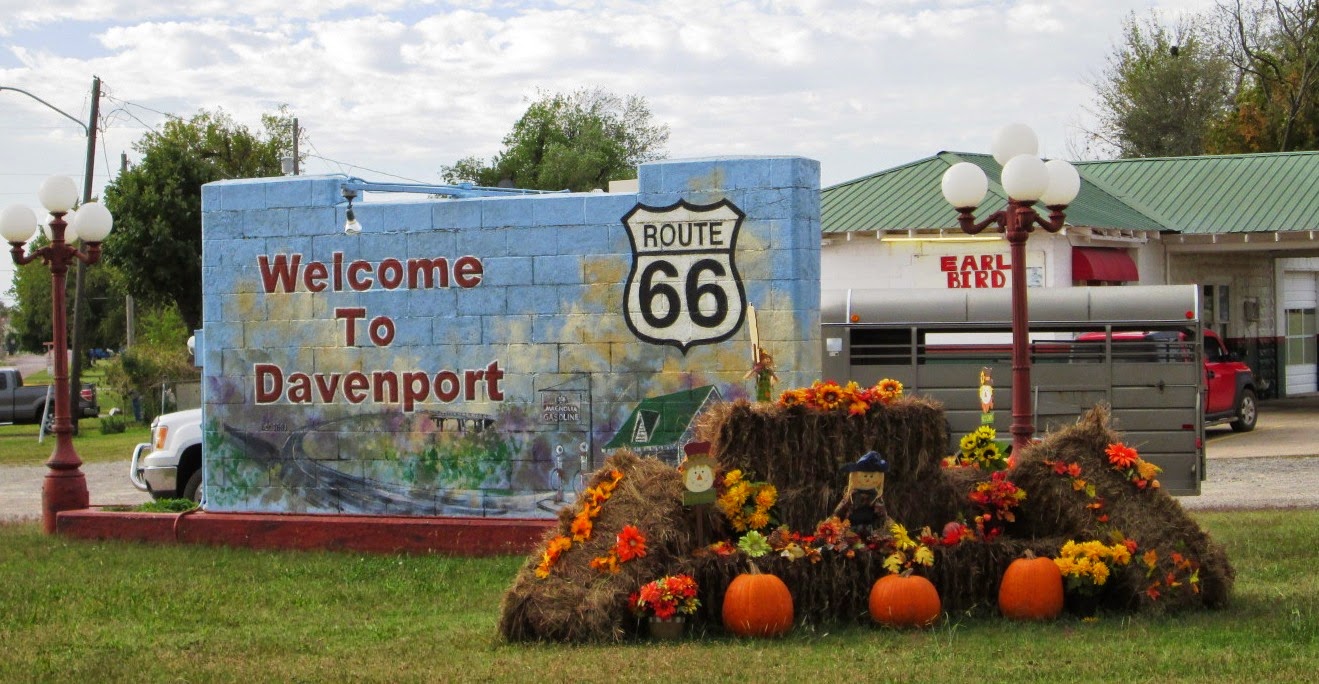 We are always looking for nice "Welcome to..." signs, and Davenport, OK has one of the nicest.  Davenport also has a number of sturdy old buildings still standing.  Here's one that's been adorned with a mural. 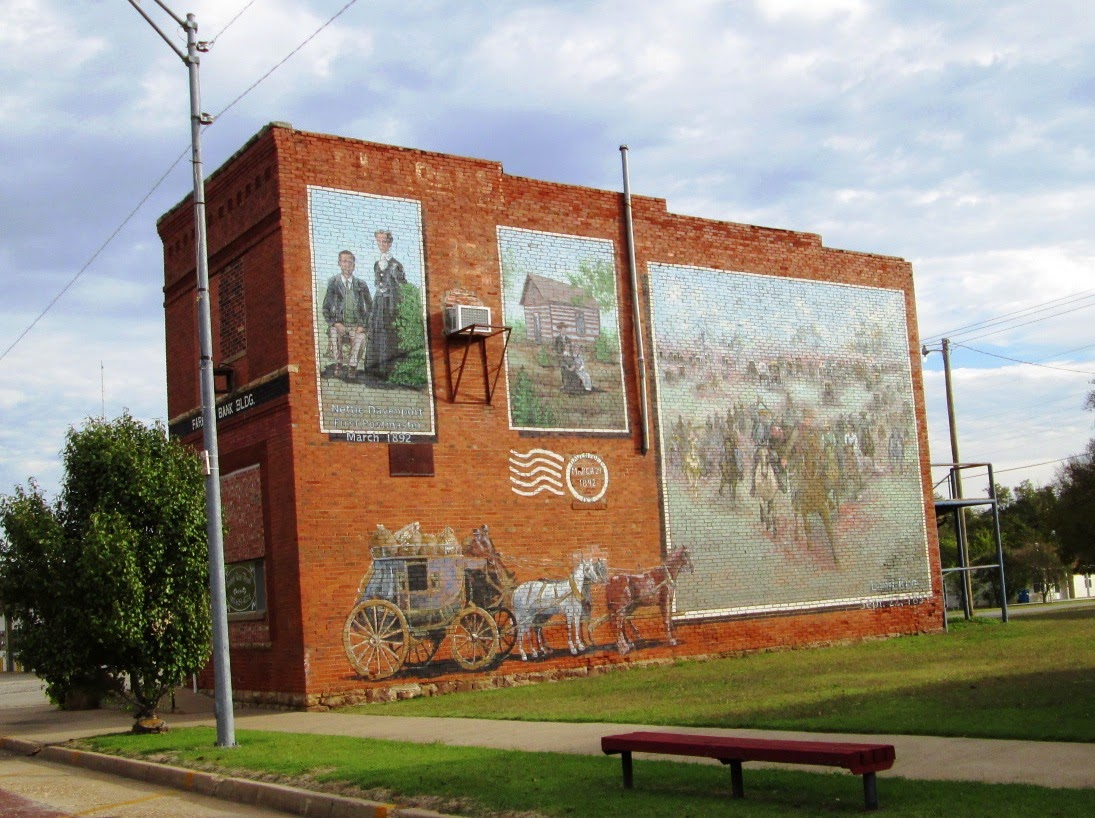 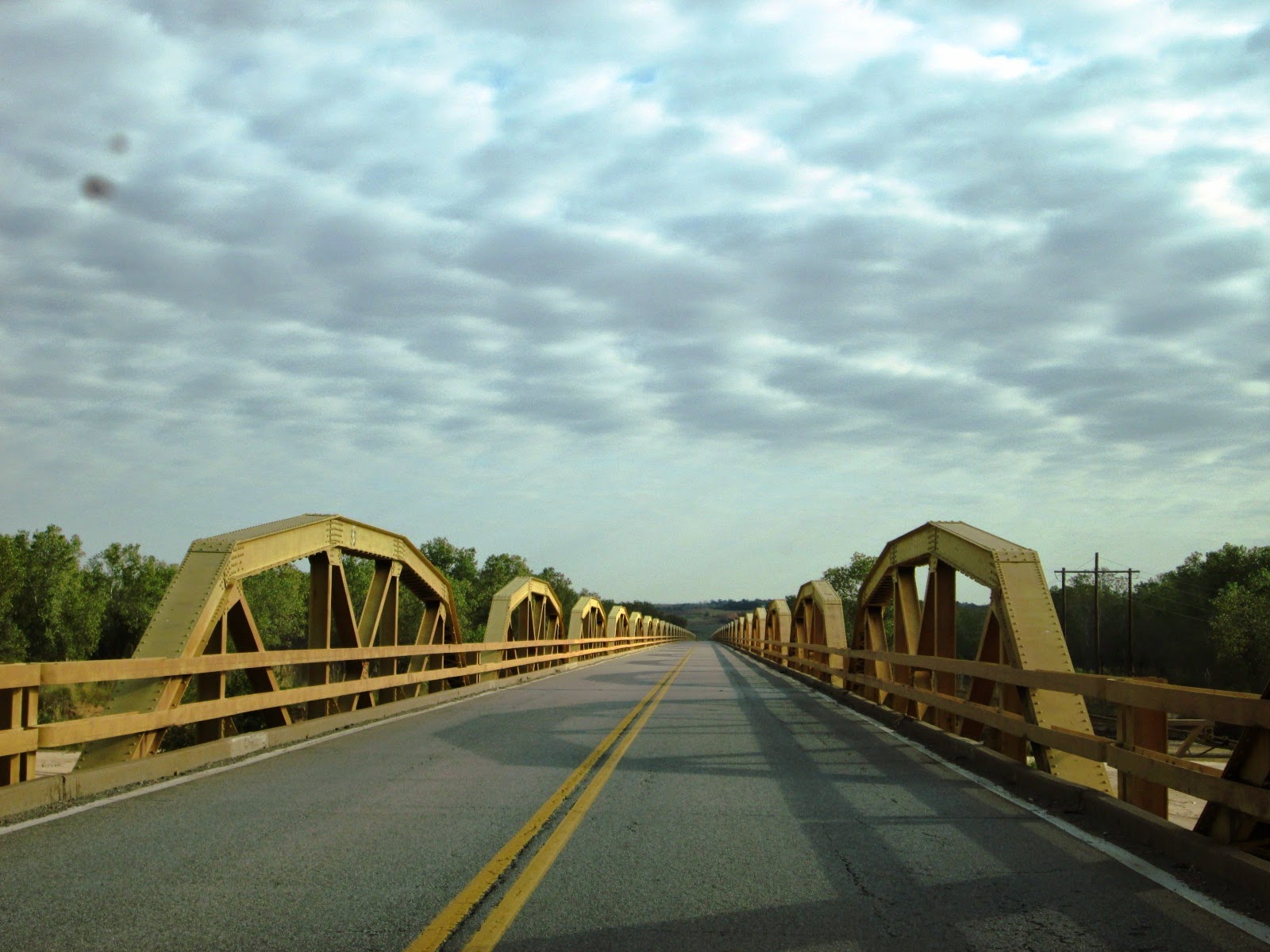 On a wonderfully quiet stretch along old Route 66 near Bridgeport, OK lies the "pony  bridge" over the Canadian River.   Today, its 38 arches (19 on each side) crossed a nearly dry riverbed.  The drought in western Oklahoma certainly became a reality to me when I saw the condition of the river. 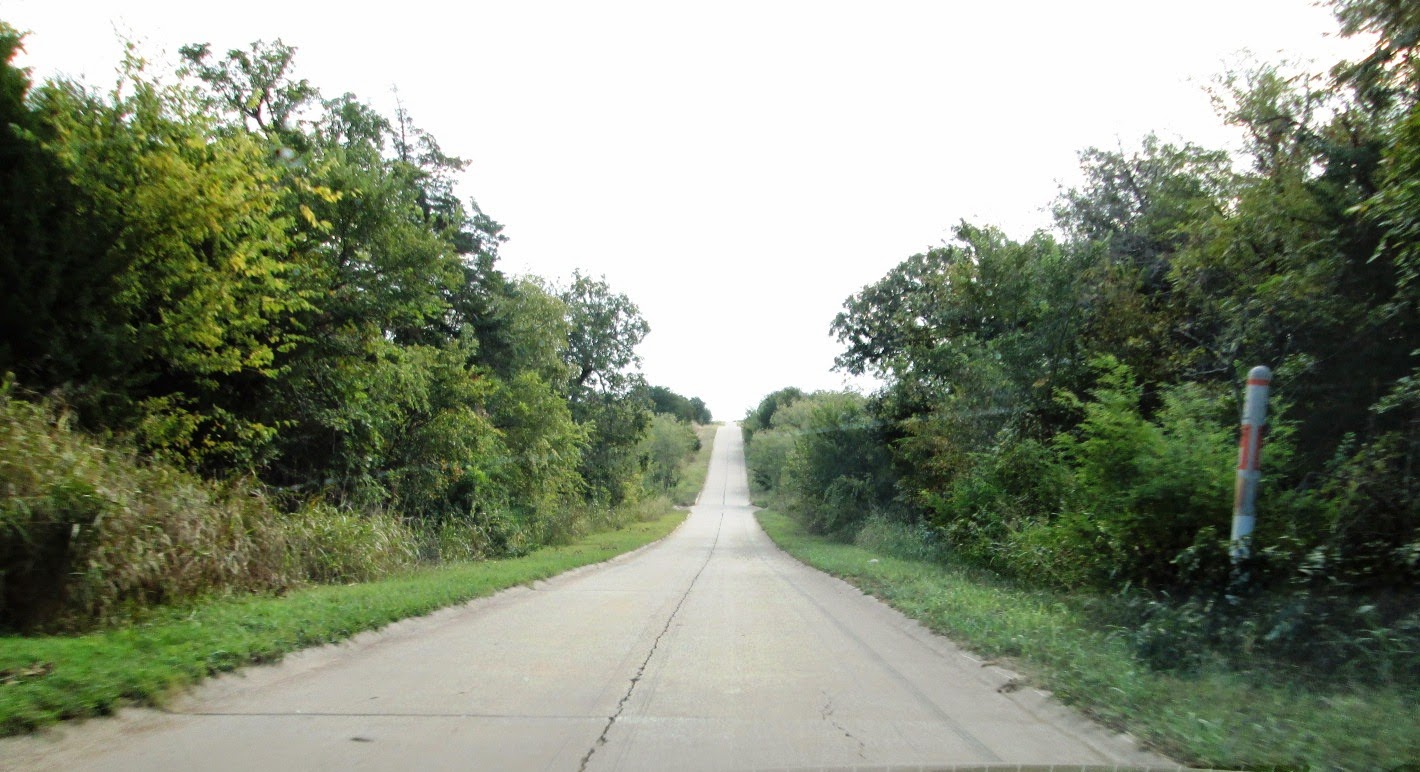 A good deal of what we drove on today was paved long ago with Portland cement which included curbs, as we motored up and down gentle hills to the to "click, click, click" sound of tires rolling over expansion joints.  It's music to the ears of Route 66 lovers. 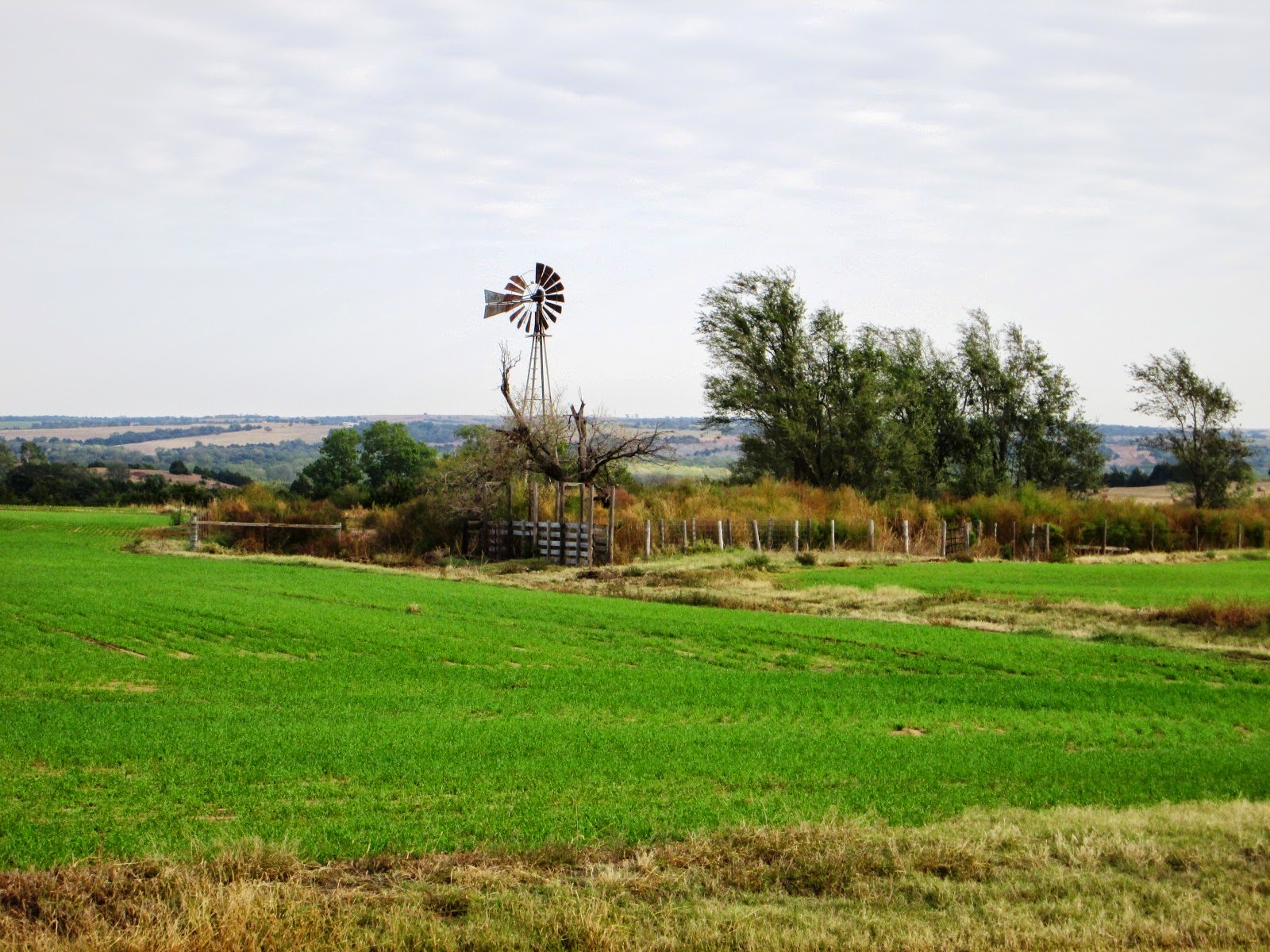 Finally, one of my favorite vistas on all of Route 66... a lone ancient windmill still propelled by wind despite that the farm it once served is long gone.   In Western Oklahoma, where many of the rural views are dominated by the sight of enormous wind farms that go on for miles and miles. it's just nice to see it done the old-fashioned way -- not as efficient, not as high tech,  but clearly far more beautiful and peaceful.

It was a fine weekend.  And, kudos to Robin, who handled a very large group of Afton Station travelers on Saturday all by herself.   She said she really enjoyed it.  I guess it was a practically perfect weekend for all of us.
Posted by Laurel at 4:19 PM