Who remembers that line from an ancient Saturday Night Live sketch?   The Bass-o-Matic!  Do you remember now?  It happens to be my all time favorite SNL skit.  Anyway, what on earth does that have to do with Route 66 and Afton Station?  Well, let me tell you.... there's almost nothing better than fresh pan fried bass, and that's what Robin treated us to at the Station today.  She catches a lot of fish in the stream close to where she and Phil live, and today she fried up a huge batch of it in light corn meal batter and brought it to us with home made tartar sauce and chips and we feasted!   It was truly delicious, and I think we all ate until we couldn't ingest another bite.  Marly proved to be a human fish-consuming machine, and I wasn't far behind.  What a great treat!   Thank  you, Robin! 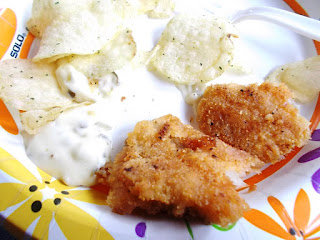 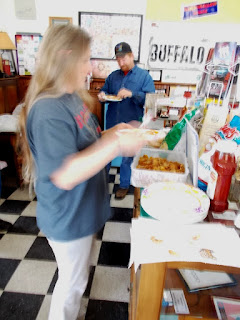 We were virtually uninterrupted as we ate, but we were hoping to have a few visitors because we put the lights on and we appeared to be open.   Nobody came to visit until near to the time that we had to leave, when a couple was seen roaming around outside the Station with GPS in hand.  We realized that they were geocachers looking for our cache.  We were able to lure them in, and we  had a great conversation with the couple who are visiting from Paris, TX.  Because they are both military brats, they have lived all over the world and it was interesting to hear about their nomadic life.

Ron M. and I had to leave at 1:30 so I could get home in time for my exercise session, so we left the couple in the good hands of Marly and drove back to Tulsa in a drizzly rain which may turn to a dusting of (aarrghh!) SNOW later.  Although the prediction is for "slim to none" in regard to snow, I hate the evil stuff so much that I don't want to see a single flake.
Posted by Laurel at 5:09 PM

My Dad and uncle caught a lot of bass on our summer vacations in Minnesota. It is a delicious fish, very mild and melt-in-your-mouth. Glad you enjoyed the fish fry so much! Made my mouth water!

This was sand bass, Beth. I wasn't familiar with that until I moved to Oklahoma. I, too, love bass, particularly striped bass. Indeed, it melts in the mouth. I still have fond memories of a restaurant in NYC that served the most incredible poached striped bass I've ever eaten.