Ron M. and I took a ride to downtown Tulsa this afternoon as we'd received invitations to the dedication of the new Boulder Avenue Bridge.  The original bridge was built over the railroad tracks in 1929 and had been deemed structurally unsafe, thus not used since the '90s.   A new one was seriously needed. 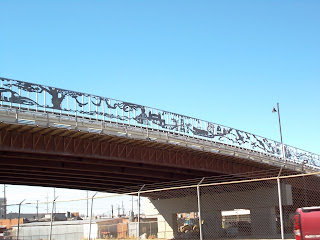 The new bridge opened today amid much hoopla, speeches by politicians and business leaders, a ribbon cutting, and the marching band from the University of Tulsa.  We watched from a bit of a distance since parking was impossible by the time we got there.  The bridge is a 4-lane now, and the railing on one side is adorned with metal cutouts illustrating important aspects of Tulsa life -- including a prominently-placed Route 66 shield.  The railing is really quite lovely. 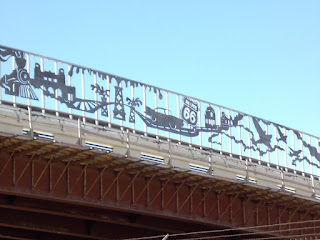 The TU Band marched across the bridge playing "Tulsa Time" and "Take Me Back To Tulsa".  At the end of the ribbon cutting ceremony, selected dignitaries piled into the Tulsa Trolley in order to be the first across the new bridge in a vehicle.  The span should make getting from downtown to the newly revitalized Brady Arts District a lot easier.  It isn't directly on Route 66, but everything in downtown Tulsa is close enough to be considered a "must see" for out of town visitors.