I didn't exactly go fishing today, but I went to fishing.  First, a confession.  I think I need an intervention.   I am completely and seriously addicted, or "hooked" as it were, on the Bassmaster Classic fishing tournament!  (Just to prove it, I'll confess that I'm writing this blog post layered upon the live streaming on bassmaster.com of the final weigh-ins of the fish caught today, and I keep switching back and forth, so if this post tends to sound a little disjointed, forgive me).  I've been glued to the live streaming the last two evenings, and today is the big finale.

So anyway, Ron M. and I drove at the usual time to Afton this morning, intending to spend a normal day at Afton Station.  When we approached the Station, I said something like "Too bad we can't just drive right past the Station and go to Grove to see what's going on with the tournament."  He said, "Lets do!".  I said, "No, better not.  We might miss some visitors and I'd feel very guilty if that happened."  So he said, "Well, ok... but we really could....", at which time I said,  "Oh hell, why not.  It's my birthday after all."   And that's how we ended up on various bridges over Grand Lake in Grove, Oklahoma seeking glimpses of fishermen and their entourages.  Well, we h ad no luck with that.  We only saw one of the 25 boats (the finalists) who were fishing today.  So, we drove to the docks from whence they left, but of course they had already shoved off so all we saw were a lot of people still lingering at the docks, plus these two gigantic inflatable motors advertising Mercury and Evinrude. 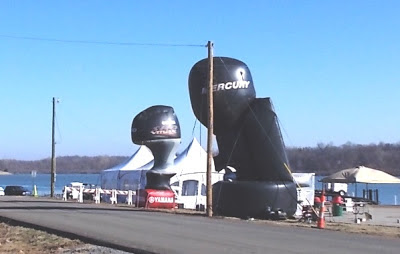 The tournament has been amazingly well-attended, with a full house in Tulsa at the huge BOK Center Arena for the weigh-in each evening.  If you're thinking this isn't exciting, you'd be wrong.  It's always great to see such enthusiasm for events in Tulsa.  The only unfortunate thing is that it appears very few of the attendees from all over the world took advantage of the proximity to Route 66.  [Sigh...]

We finally got back to Afton Station at about 10:30 a.m., after which we sat there for 3 hours with only one visitor, a man who has visited before who apparently came this time just to make a purchase, because he wasn't interested in viewing the cars.  (He did arrive in a very slick hot rod, however).   At 1:30 we decided to close up for the day and head for home.

I'll be back tomorrow because I have a few more photos to show you.  Now, I must leave and give all my attention to the bass weigh-in.  I hear they're having a gigantic birthday party for me later tonight in Hollywood, but I'd rather just stick with the fish.

Glad you took the chance to see the fishing tourny. Hope is was a grand day!