This is the second Tuesday in a row which was super slow.   Ron M. was with me both days, and I don't think he believes that we had such large crowds during the whole time he was in the hospital.  We're into October now, so I'm assuming that things will slow down in general in the next few weeks, but I'm not looking forward to it.

We had 8 visitors today, from Indianapolis IN, Hutchinson KS, Hannibal MO, Boonville MO, Tulsa OK, and Bartlesville, OK, so we know that travelers are still out there.   This lady from Indy came the first thing in the morning.  She's doing Oklahoma Route 66 solo, and she's traveled other portions of it over the last couple of years.  She has a site full of great photos, both of Route 66 and other places, at http://www.flickr.com/photos/thedefiningmoment.  Check it out. 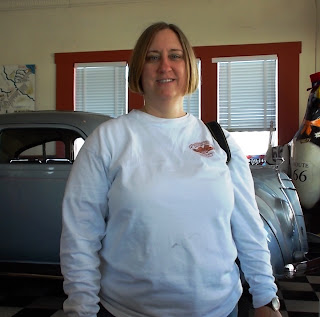 Robin and Phil brought me this great flag which they got in Arizona en route to California on their vacation.  I just love it, and I think it will draw the attention of passing Route 66 travelers.  Thank you, guys! 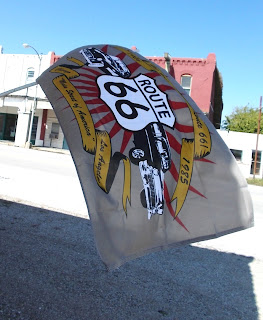 Lauren, this article was posted one KY3.com (local TV)

It's great that the initiative is being taken. In our case, although there were thousands of dollars involved in the restoration, at lease we didn't have to have the underground tanks removed, as that had already been done.