And Then There Were Ten

This day, at least up until about 1 p.m., was about as different from yesterday as night and day at Afton Station.   Ron M., Tattoo, and I sat and twiddled our thumbs until afternoon while not a single traveler found his or her way to our door.   Hey, what's going on here?   Almost 90 people yesterday and NOBODY today?  Has Afton finally been quarantined?

At last, visitors started coming in, but slowly.  By the end of the day we had visited with only 10 folks, but fine folks they were.   They came from Newark DE, Omaha NE, Oklahoma City OK, Hutchinson KS, and Hannibal MO.   We had nice chats with all of them, but I failed to take a single picture of any of them.  I guess I was still coming out of the coma induced by the boredom of the morning.  The best thing about the day was that just about every visitor was truly interested in the old cars, thus I was asked quite a few questions I couldn't answer.  That's what I should have been doing in the morning -- using the quiet time to brush up on what's under a Packard hood! 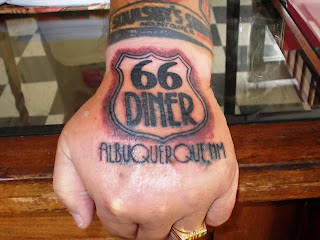 Tattoo Man got another tattoo yesterday (big surprise. . .).  He had it put on his left hand, and he asked me to post a photo of it here so he can direct friends to the blog if they want to see it.  It would seem that there's not a single spot left on his body (well, on the public portions of his body) for any more tats.  Nevertheless, he already has plans for several more.  This is No. 118.
Posted by Laurel at 5:53 PM