The Land Down Under

I was given this bumper sticker today.   Don't you love it?   And, since we hosted a bumper crop of Australians this morning, thanks to another one of Dale Butel's wonderful tour groups coming for a visit, it's quite appropriate.   There were 69 people in Dale's group, half on motorcycles and  half in Mustangs and other vehicles. 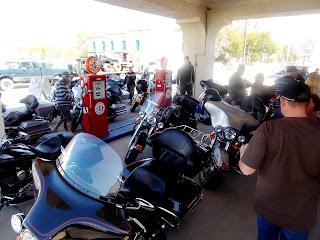 They were parked all over town.  Afton hasn't been this populated since Route 66 was bypassed! 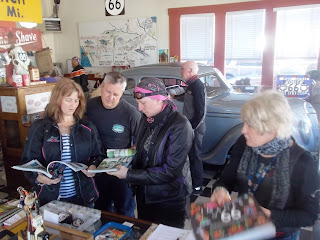 And they were in a buying mood.  This, obviously, didn't bother me a bit, except that now I'm running a bit low on some merchandise.  And, as is always the case with our friends from Down Under, there wasn't an unhappy person in the group.  They were having fun, and isn't that what Route 66 is all about?

Ron M. and Marly were there to help handle the crowds.  Since the Aussie folks were by no means the only visitors today, their  help was absolutely vital.  You would have thought this was a day in mid-July, not late October.  Eighteen more visitors came from Mountain View CA, Signal Mountain TN, Indianapolis IN, Bella Vista AR, Gold Coast Australia, Mexico City Mexico, Denver CO, Centralia OK, and Warsaw MO.

This husband and wife from Mountain View, CA were first in the door this morning, which is why they're the only folks I had time to photograph.  They drove from CA to Chicago to begin their trip going east to west, because people had told them that it's easier that way.  They agreed, and they're having a great trip in their little RV. 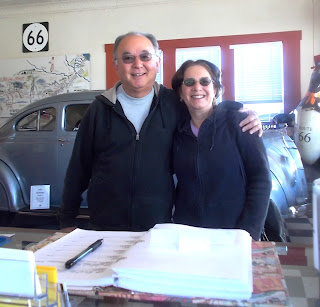 I hope tomorrow is as wonderful as today.  The weather has been great, so maybe lots of people will be out exploring the wonders of the Mother Road.