I was thinking that this might be a boring day at Afton Station. As usual, I was wrong. Helping to make it a really good day was the arrival of Marly, then Phil and Robin, in the morning. Phil has just had surgery on his Achilles tendon and is in a big cast. I was glad to see him able to hobble around with a walker just a couple of days after the major surgery. You can't keep a good man down. Marly came in to report on yesterday's invasion of the Vikings. That was quite a day for him. . . but more about that later. Ron M. was absent today because he's suffering from the same insidious virus that has been plaguing me for the past week. I'm better now, but he's worse. :-(

Here's today's gang: Marly, Phil, Robin, and Richard, who is our new friend from town. We had a nice morning greeting visitors and chatting. 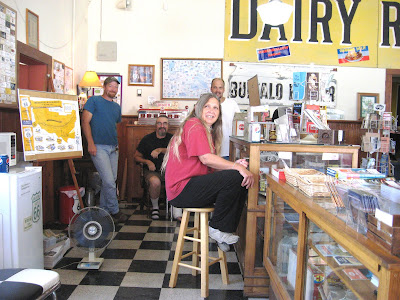 Toward the end of the day, much anticipated visitors arrived. These three great looking guys from Cleveland, OH are celebrating their graduation from high school by roaming Route 66 for the summer and making a video of their travels. 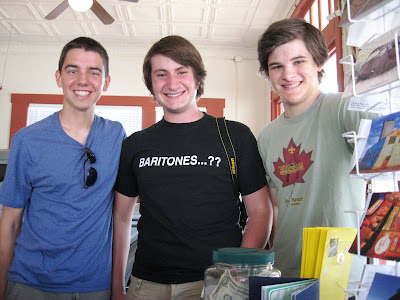 You've heard me talk about how much I appreciate it when younger people show an interest in the Mother Road. These three are shining examples of just the kind of "kids" we need to spread the word and, hopefully, get others interested in seeing what is out there waiting for them if they get off the interstate and explore the small towns and slow roads. I have every assurance that they WILL spread that word, because I truly think they were having fun and learning a thing or two. They quizzed me with a very professional interview and I look forward to seeing the resulting video. I also very much hope they will return next summer and the summer after and the summer after. . .

Well now, Marly had quite a day yesterday. Not only did he open the doors to the 42 Norwegian motorcyclists, but he also greeted 26 other guests. Among them was Jeanie Righter, known as the "Car Show Diva" (www.carshowdiva.com) who writes for automobile magazines and took lots and lots of photos of yesterday's Viking invasion. Here are just a few of those photos. Thanks, Jeanie. 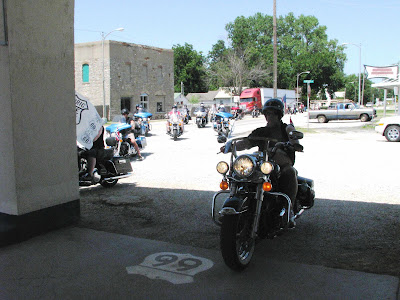 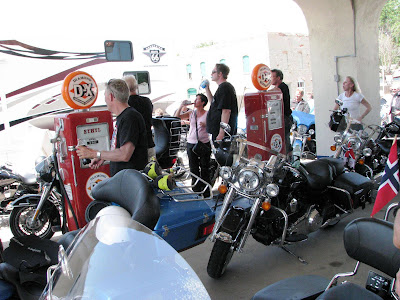 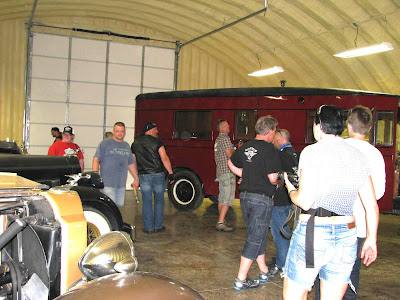 Just a high note about the kids and their fascination for The Mother Road. Roadtripping and exploring Route 66 are exactly the kind of things that the youth should really try. It's really worth the adventure, yeah? This is the kind of escapade that brings sweet surprises, with interstate driving and just cruisin' on the highway on a high noon. Maybe those who are first time car owners would be thrilled to drive their new cars down this historic route. Let's look forward to more young roadies who'd share things like roadtrip music!

Just catching up on some reading ... if anyone can get a hold of these kids, have them contact me. As a former Clevelander I would be delighted to meet them at the western terminus if they are still traveling.

Scott - It may be too late, but tomorrow I'll look in my guest book and see if I can find their email addresses so you can contact them.