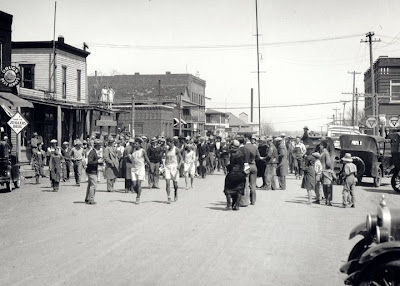 Some time ago I was contacted by one of the organizers of a footrace which will run across America from coast to coast, including Route 66, this summer to commemorate and re-create the legendary Great American Footrace, also known as the Bunion Derby. The original race was run in 1928 to publicize the opening of Route 66. It started in California and ended in New York.

Although over 200 runners entered the earlier race, many of them the best runners in the world, the competition was won by a 20-year-old man named Andy Payne from Foyil, OK, which is right up the road from Afton.
When I was contacted earlier this year, I was asked to have Afton Station open in the early morning of Tuesday, July 26 for a quick stopover by the runners, who will have left from Vinita earlier that morning. I'm very excited about this, however I haven't heard a word from the organizers since then. I've tried to contact them, to no avail. When I find out if this is still a viable plan, I'll announce it here so that if anyone would like to venture over to Afton around 7 a.m. on that day, you could be there to cheer the runners on. Meanwhile, check out the above photo, supplied by Joe Sonderman, of the original Bunion Derby as it passed through El Reno, OK. Look at the crowds it drew! It would be nice if we had at least a few spectators around to root for the modern runners. Running across America is, after all, a major feat!
Posted by Laurel at 3:11 PM

That would be terrific if it can happen!

As an encouraging mum, if I can say so myself, I had a nice time recently with my two kids to decorate their room in our new house that we just moved into. There were lots of the children's art work, made at home and school, that we happily put on the wall.
Then we spent time together sitting in front of the iMac and looked through the big collection of digital images that wahooart.com had for their customers to select from and have printed as canvas prints. The kids together chose this painting for their room, Ivan Horse by Edmund Dulac, http://en.wahooart.com/A55A04/w.nsf/OPRA/BRUE-8LHRV2, that we ordered online to have delivered to our new house.