I don't think we got much here in Tulsa, but I went through two very big rainstorms on the way home from Afton, and they were accompanied by some very strong winds and lightning. It felt so good to watch the car thermometer plunge from 108 to 89 in a matter of minutes. The aroma of the rain on the fields and the sound of rain banging against my windshield were such welcome sensations. Rain!
Today was the reverse of yesterday at Afton Station. We had a busy morning and a slow afternoon. Again, Robin and Phil were with me. We have such a good time together during the times when there are no visitors. Several times we laughed until we were in tears. Nice people!
Our 18 visitors came from Paola KS, Springfield MO, Fair Grove MO, Nixa MO, Broken Arrow OK, and Salamanca, Spain. Here, the young woman from Spain examined the painting on Phil's cast. That cast has become a show stopper at Afton Station! 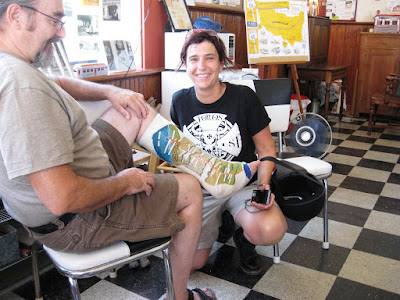 This must have been Corvette Day at Afton Station. We had a total of four 'Vettes pull into the Station today!
When I arrived home just now, this was in my email box. A gentleman named Bob Davis visited the Station last month and happened to show me some of his wonderful art. He said he'd send me a painting of the Station, and . . . he did! Isn't it great?! I love his style! 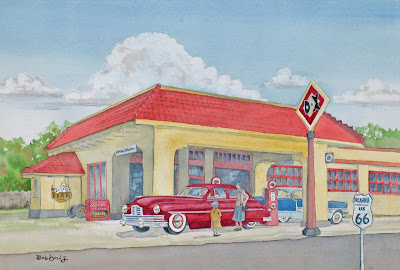 I am sure any rain anywhere is welcome at this point.