Sometimes a girl needs to do something different.  A spring day does that to me.   And since Sue is working at Afton Station on Tuesdays now, I have a virtually free day to do what I like.  I turned on the news when I arose this morning just in time to hear the new young anchor woman tell me about an event that was to take place in just a few hours.

First, you must understand that I neither know a single thing about nor do I particularly care about World War II airplanes.  Nevertheless, on Route 66 in the small town of Bristow (45 miles west of Tulsa), at approximately 9 a.m., an old WWII aircraft was to take off and apparently that was an important and interesting enough event to pique my interest.  So, off I went. 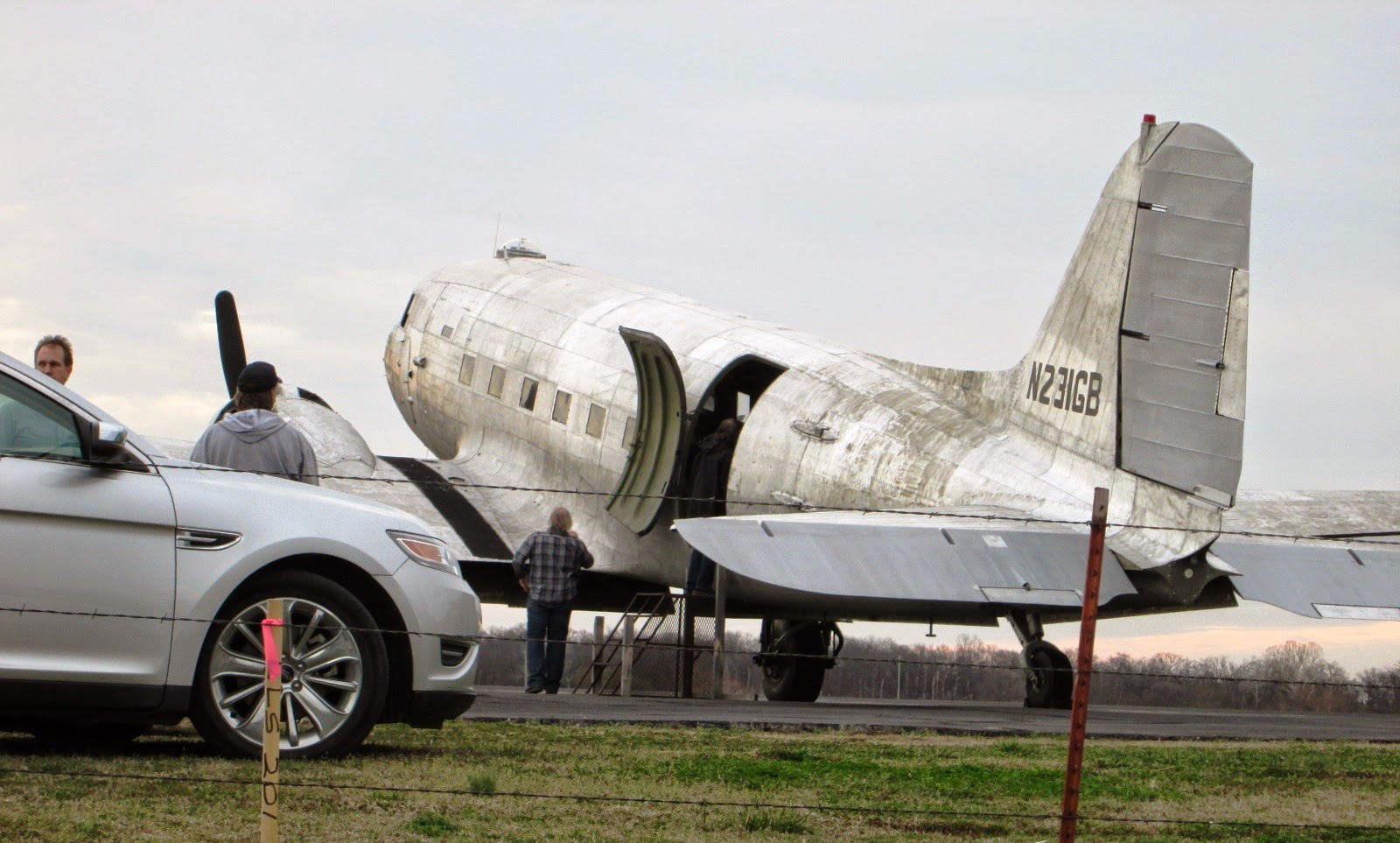 I got lost on the way to the tiny airport and so arrived too late to get a decent parking place, thus the unremarkable quality of the photos I shot.   The plane is "Round Trip", a C-47 which was coming back to life after 10 years of restoration work by Pilot Erik Aarvik.  The plane has an interesting history about which which you can read and see a video at   http://www.kjrh.com/news/local-news/wwii-era-plane-round-trip-to-fly-from-bristow-to-california-aircraft-originally-flew-during-d-day .   It's kind of beat up looking, since many coats of paint were removed to bring it down to bare metal, but after what it had been through in the war, including losing part of one wing over Normandy, it seemed to be proud and happy.  It is being flown to California by a private company which recently bought it for display purposes. 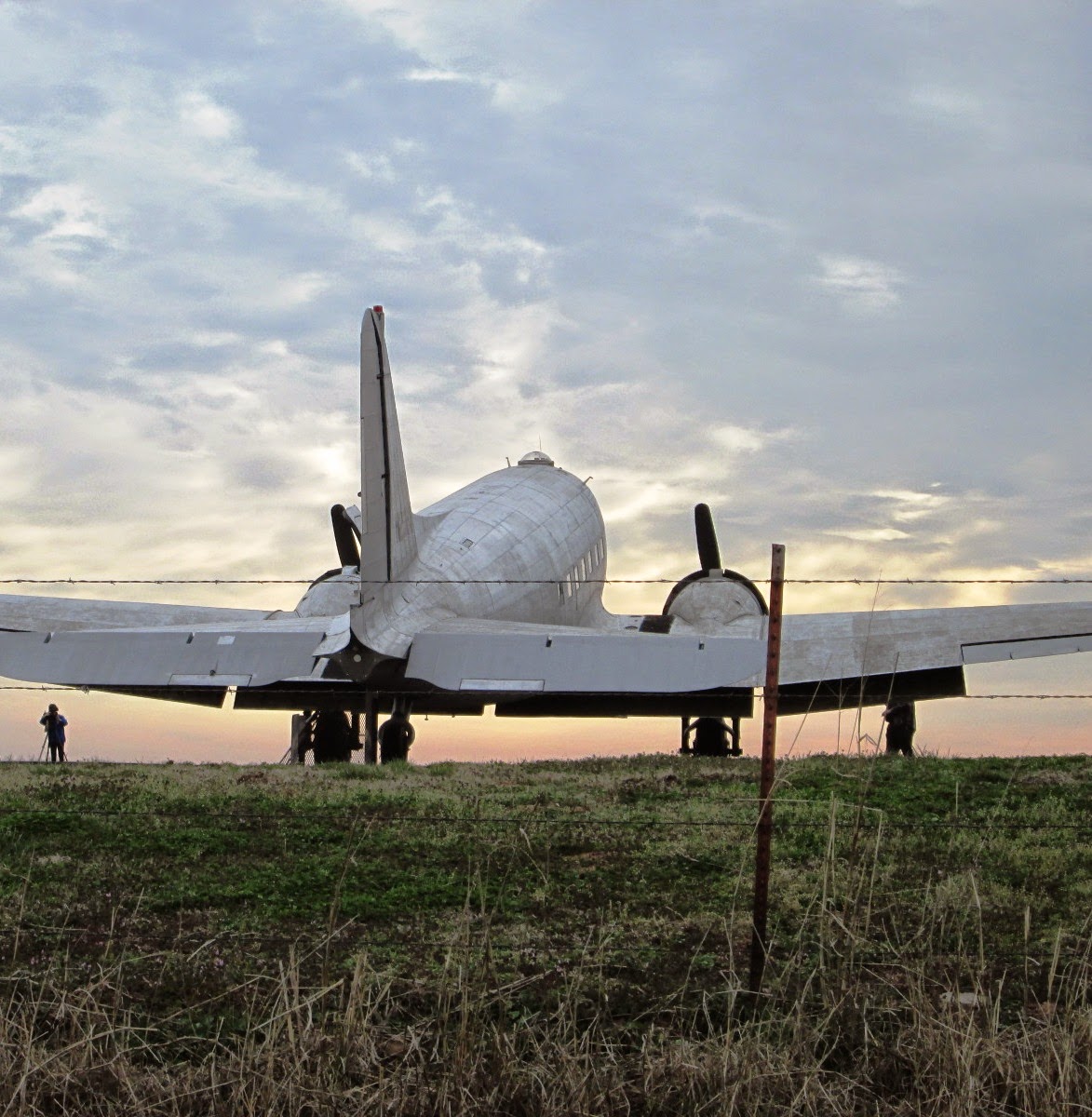 Round Trip finally took off, not a half hour later than its scheduled 9 a.m. departure.  My little point-and-shoot camera, coupled with my lousy vantage point, resulted in just one photo of it actually in flight, but I have to admit that the roar of the engine and the sight of the rotating props against the pink morning sky managed to raise a pretty good crop of goose bumps on my skin. 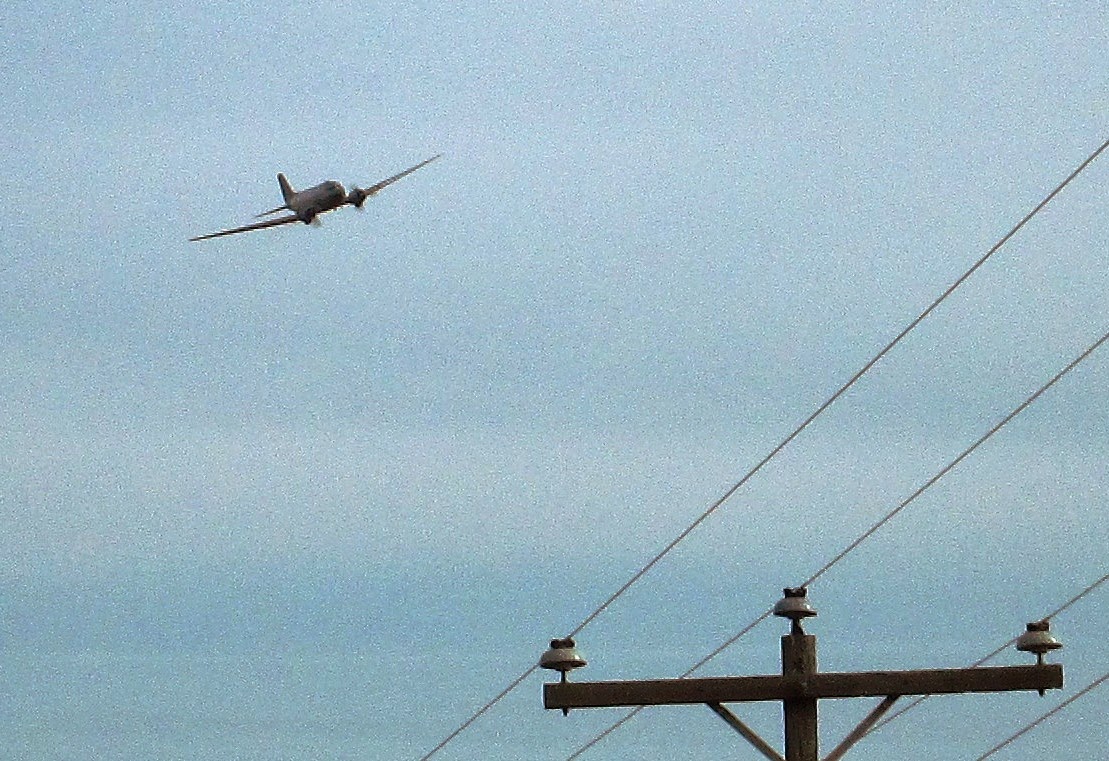 The plane will be landing in Shawnee, OK and El Paso, TX before reaching its final resting place in California.  And along with about 200 other curious folks this morning, I wished it a smooth and safe flight.
Posted by Laurel at 1:36 PM

Can't be too many D-Day planes and pilots still around. I'm guessing that Neblett (the 96 year old former pilot) isn't very mobile these days but I hope he and the plane got together for a little bit before it left the area.

Denny Gibson - Local news reported that the elderly pilot was not able to come to the airport, but his son called him and let him listen to the sound of the props and the engine as it took off and it brought back many memories.

Interesting story Laurel. Thanks for sharing that.