Thanksgiving at the Freeway 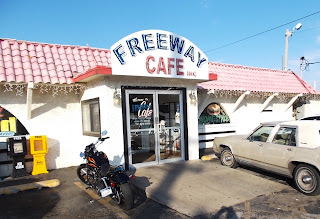 In an attempt to keep a little tradition going for another year, a few of my Tulsa friends and I decided to have our Thanksgiving "feast" at a local diner.  You may recall that we did that two years ago and ended up with a very unsatisfactory meal but with a lot to laugh about in the following years.  This year, I chose the Freeway Cafe at 4th and Sheridan for several reasons:   I have a friend who highly recommended it, the comments on their website are nearly 100% positive, and I went there for two "test meals" recently.  Although those meals were breakfast, I felt sure that if the quality of their Turkey Day offerings were as good as their breakfasts, we'd be just fine.   Also, they are known to have a wonderful, friendly staff.   All those things turned out to be absolutely accurate.

We arrived around 1 p.m. and the place was buzzing with guests, but we managed to get a good table immediately.  The place isn't at all fancy, unless you want to count the life-sized Elvis in the corner.  Everyone seemed to be in a good mood and came from all walks of life.   The large family of the owners, whom I believe to be Lebanese, were crowded around a table near us and seemed to be having a ball interacting with all the patrons.

The turkey was very tasty and fresh, and I even got a good bit of dark meat, which is my preference.  The mashed potatoes were the real thing and the gravy was great.  There was also cranberry sauce, green bean casserole, stuffing (which, in general, I don't like and this was no exception), soup, salad, and home made rolls.  All this came at a hefty price of $6.99 (with a bit extra if you got pumpkin pie). What a bargain! Our waitress was a sweetheart, hovering over our table as if she didn't have about 20 other tables to attend to.  Upon seeing me having trouble with my camera, she even offered to give it to her son at a nearby table to see if he could repair it.  He couldn't, but he tried.  On top of all this, the people-watching was excellent! 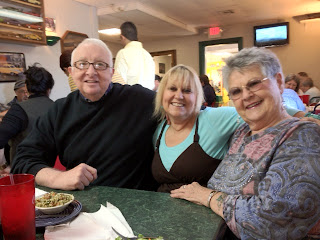 Ron M., Theresa (Deanna's daughter) and Deanna.   (Theresa, who was the youngster in the group at 40-something, said that she had a great time with "all you senior citizens".  Don't know exactly how to take that.  I do know that an elderly gentleman whom we believe to be the owner of the place spent a lot of time flirting with her!) 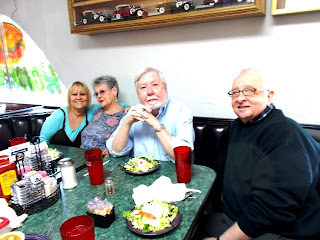 In the middle is Joe, who didn't get in the other picture. 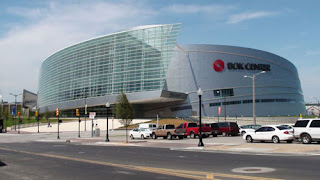 After dinner Ron, Joe and I took a ride all over downtown Tulsa.  We were all astounded by the progress that's being made there, a huge revitalization effort that seems to be working.  There are new condos, tons of new restaurants and bars, streetscaping, a new park called Guthrie Green (named for Woody Guthrie), and, of course, in the last couple of years the opening of a professional baseball stadium for the Tulsa Drillers and the huge BOK Center, an indoor arena that since opening consistently get listed in the Top 10 most lucrative and well-attended venues in the United States.  During the holiday season, there is an outdoor ice skating rink and the "tallest Christmas tree in the state" next to the arena.  I'm sure proud of my adopted town!
Posted by Laurel at 1:27 PM