A Fine Day for Bikers

It seems odd to greet very many motorcycle riders in November, but today's weather was such that it was probably perfect for bikers to be out in the sun and cool weather.   Seven of our twelve visitors to Route 66 today arrived on their bikes.   These five gals are members of the Twisted Sisters Chapter of Women in the Wind.  They're from Tulsa and were taking a little one day jaunt on Route 66. 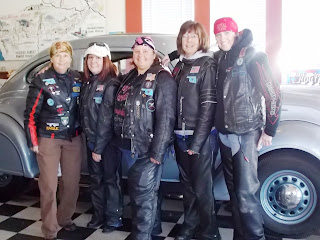 At the same time, two people (one from Bartlesville OK, and one from Tulsa OK) arrived on their bike, followed by visitors from Vinita, Ponca City, and Tulsa, OK in regular old enclosed four-wheel vehicles (cars).

Some more European honeymooners visited today, too.  This beautiful young couple from Barcelona, Spain, just a few days into their marriage, said that they've known for a long time that they wanted to take their wedding trip on Route 66.  They're glad they did. They're finding the trip to be everything they had expected and then some. 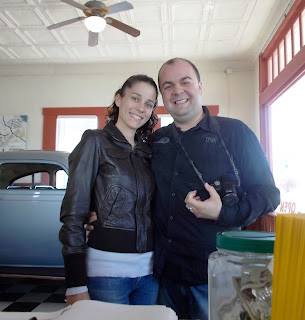 Here they are inspecting Bob Waldmire's mural and perhaps plotting future days on the road. Ron M. was with me as usual, and Betty, Robin, and Phil all dropped in for a while.  The statue in Tulsa that I featured in yesterday's blog post are being dedicated on Friday, and I intend to be there.  I'll have a report next weekend.   Have a nice Saturday night and don't forget to turn those clocks back (unless you live in Arizona!).