Perhaps this weather is only tolerable by the young and the fit.   That could be the reason that, uncharacteristically, most of our visitors today were young.   They were also from Europe.  And two couples were on their honeymoons! 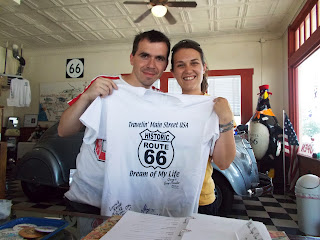 Here's a newlywed couple from Milan, Italy.  Yesterday their travels took them to Gary Turner's Gay Parita at Paris Springs, MO where they bought a t-shirt and he advised them to get autographs on it from all the folks they visit along the way.  Therefore, Phil and I had the opportunity to act like celebrities and sign the shirt! 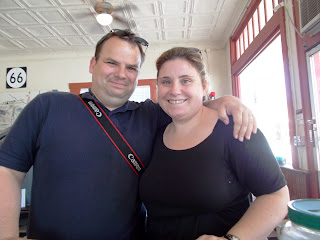 This honeymoon couple comes from Kent, England.  When I asked them why they weren't in London at the Olympics, they indicated that they had no interest in facing that mob scene.  I, on the other hand, would have enjoyed a few breaths of London's 60-degree air! 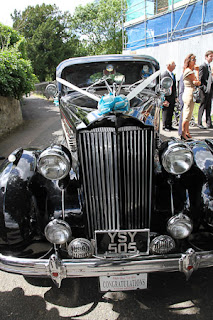 I captured this photo from their online wedding album because I couldn't resist the beautiful Packard that carried them to and from the ceremony.  Wow! 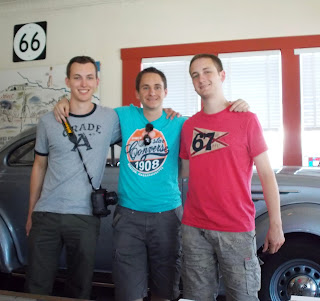 Three young guys from Besancon, France came next.  They seemed to be  holding up well to the heat and looked fresh and eager to see everything along their way across Route 66 to California.

Other visitors included a father and son team who arrived from St. Cloud, MN in an over-the-road truck.     The father, originally from Bulgaria, was taking his 10-year-old son on one of his routes for a couple of weeks.  Nice folks, but refused to let me take their picture.  That's unusual!   We also had visitors from Nowata OK, Bernice OK, and Sebring FL.

Ron M. is out of the ICU and in a regular room.  Hooray!   He's doing a lot better.  I have much to do tonight and, due to an hour traffic jam on the way home from Afton, I'm late to get started.  Therefore, I'm signing off now and will be back on Saturday.

Happy Day--Ron's out of ICU.

Great day, too, for you at Afton Station.

Good news all around.