It looks for all the world like we're about to get some rain!  It's dark and windy and all the signs point to it.  Furthermore, it's supposed to rain several times in the next couple of days, meaning that perhaps we won't have to anticipate another 1930s-style Dust Bowl after all.   It's too late for the corn farmers, but the soybean crops seem to be surviving.   And, it's MUCH cooler, too.  I'm very excited about the prediction of rain, glorious rain!

Today at Afton Station was nothing short of wonderful!  The majority of our visitors were from foreign countries, and each and every one of them was filled with enthusiasm and the kind of joy that only Route 66 seems to engender.

The two guys with Betty W. in this photo are Oskar and Esteban from Donostia and Bermeo-Bizkaia (respectively), Spain.  They're traveling Route 66 filming interviews with shopkeepers, etc. for eventual use in a film which will be made in Spain, explaining the mystique of Route 66 to the Spanish people.  They interviewed me, and then when Betty came in they were fortunate enough to be able to take some time with her in order to learn about what owning a drive-in on the Mother Road was like in years past.   Oskar and Esteban were absolutely charming and after over an hour we wished they didn't have to leave! 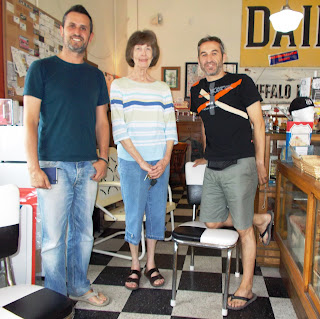 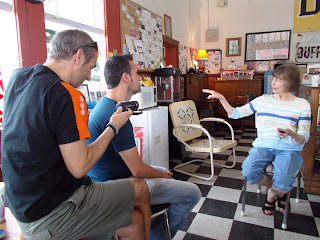 More lovely people!  This family from Sydney, Australia was displaying typical Aussie friendliness and happiness.   Love those Aussies!   Their little girl, Sara, was sweet and charming and she seemed so pleased when I gave her a souvenir magnet that I just had to snap one more picture of her.   The family stayed for quite a while and we enjoyed some good conversation. 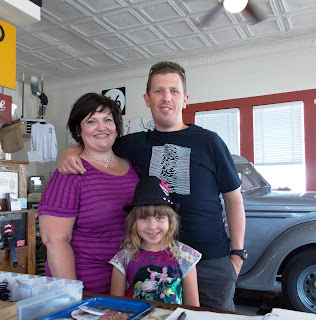 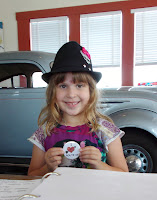 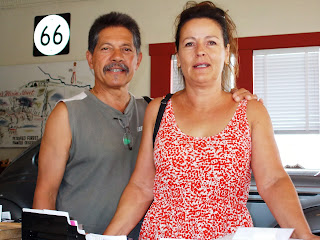 But that's far from all.  Here is a couple from Boussens, Switzerland who also found their way to the Station on their way to California.  I love her dress!

My enthusiasm for today may belie the fact that I'm a bit sick.  Just a cold, I think, but after all the vigorous talking today I have almost no voice left, and I'm aching all over.  I must get better before my daughter Sarah arrives on Friday... so I WILL!

Note:   This sign went up a few days ago at the old abandoned convenience store about 1/8 mile down the road from Afton Station.  We shall see if it actually materializes.  It would be grand to have a good BBQ place in Afton, but as yet I can't see much movement toward completion of the restoration of the building. 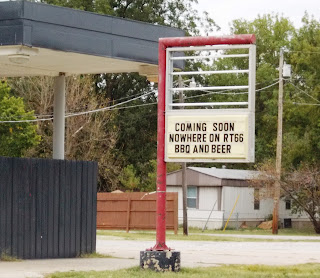 Fingers crossed for a new BBQ joint in Afton!

Feel better soon...and congrats on the rain! I know quite well what a relief it was!