A Couple of Extraordinary Days

It happened yesterday for Phil and Robin, and it happened again today!   Two amazing days in a row!  Lots of visitors, lots of sales, lots of laughs, lots of friendly conversation.   Between the two days, we had over 100 visitors!

Yesterday, Robin reported receiving visitors from Spain, Australia, S. Africa, Italy, England, and 8 various states.  Today we began the day with a group of  17 bikers from Spain, led by my Route 66 friend Ken "Landrunner" Turmel from Oklahoma City.  They roared in shortly after we opened and didn't roar out for nearly an hour, heading for the Munger Moss Motel in Lebanon, MO.  I sent Robin out to take this photo because I had to deal with several issues inside.  The man in the white shirt is Ken, caught as he led the group away from the Station
. 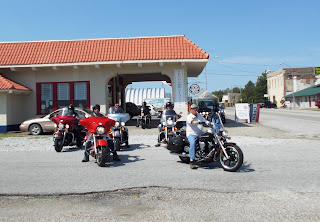 We all got to Afton early (8 a.m.) this morning to get the '65 Chevy Convertible ready to represent us at a big Hot Wheels and Die Cast Exhibit in Jay, OK.  Our car was to be featured at the show and also in a program by the Discovery Channel to be filmed at the show.  Other cars were invited to arrive at 3 p.m. for a big car show and cruise, but ours was to be the sole feature during the morning hours.

Our other visitors today hailed from Bari Italy, Lincoln NE, Green Valley AZ, Houston TX, Cedar Rapids IA, Port Byron IL, Afton, Peoria, Miami, and Tulsa OK, and a mysterious location which took me quite a bit of time to figure out, but which now I believe I've pinpointed.  Two young people who spoke almost no English described where they lived as "Spain, but not Spain".  They indicated in the guest book that "Jesus Aramburu Euskal Herria" was their home.  It took a bit of time on Google and some Wikipedia research when I got home to establish that (I think) they're residents of the Basque Country, which is indeed a part of Spain although most Basque residents like to think of themselves as a people apart.

I can't wait until Ron M. is well enough to come back to Afton Station.  We all miss him and hope that he'll agree to ride with me as soon as he's feeling well enough and gets the thumbs up from  his doctors.  Meanwhile, he's doing very well at home, I'm pleased to report.

My heart is in Victorville, CA this weekend.  So many of our Route 66 friends have gone there for the annual International Route 66 Festival.  I almost always attend myself, but this  year it just didn't work out for me schedule-wise.  I know they're having fun and look forward to seeing some photos of the event very soon.

100 visitors in two days! That's wonderful and what fun for you.