Driving into Tulsa from Afton this evening, the skies kept getting more and more yellow with every mile.  There's a huge yellow cloud over the city, blocking out the sun and causing the temperatures to plummet from 112 to 109 [insert sarcastic laugh here].    There have been some very serious fires west of Tulsa on Route 66 in Creek County, which actually closed down both Route 66 and the Interstate at times today.  One of the fires was intentionally set, which makes me so mad I'm spitting nails.   Because of an idiot arsonist, many people lost their homes and livestock.  Even now, they're announcing on the TV news that residents are being advised to evacuate their homes in parts of Creek County.   One hundred and twenty-one homes have been lost so far.  Furthermore, the air is so smoky here in Tulsa that my eyes are burning and I'm feeling sorry for folks with respiratory problems.

(Trevor -- I believe that the fires are centered in your home town, Luther.  I hope that any family and friends you have there are safe.)

Here's the "yellowness" from my front porch. 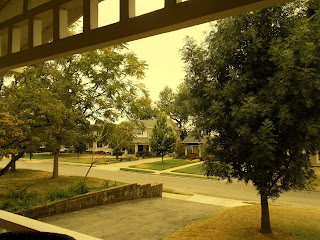 At Afton Station we were under sunny, clear skies since we're east of Tulsa and out of the fire area.  That didn't mean we had bunches of visitors. Nearly everyone who visited was close to collapse from the heat.   These folks from Griffith, Australia (halfway between Sydney and Perth, in what they described as the "salad bowl" agricultural area of Australia) were enduring the heat while enjoying the fact that they weren't back home where it's the middle of winter. 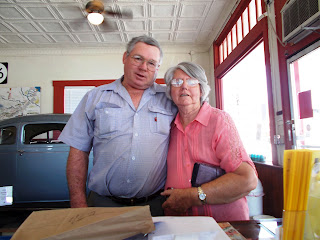 These folks from St. Paul, MN were heading home from a partial Route 66 trip.  They were trying to make it to Omaha today, but they spent a lot of time with the vintage cars, so I'm afraid they might not quite make it. They're the inquisitive types, so I doubt they'll want to miss out on the many Route 66 attractions they'll pass on their way. 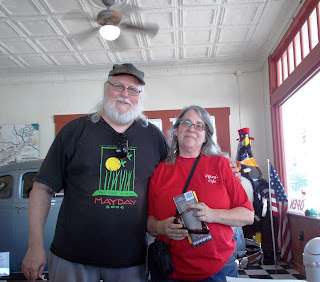 Jon Edwards, a good friend of Afton Station, stopped by on his motorcycle and stayed for a nice long time while we caught up on what's going on in our lives.   Jon has been attending a lot of car shows lately and his vintage beauty has won a handful of awards.  Way to go, Jon!

A "full timer" gentleman (one who has lived in his RV for I believe he said 15 years!) came for a visit.  He was a very interesting fellow, with truly fascinating stories of his great-grandfather's trip on foot from Colombia to California with a herd of burros during the Gold Rush.

Rounding out the guest list was a young couple from Turin, Italy doing Route 66 from California to Chicago.  They appeared to be having the time of their young lives.

Phil and Robin were there to open for me and Phil came back later in the day to help me close.  The best news of the day is that there's a chance that Ron M. will be released from the hospital tomorrow.  Think good thoughts!

Excellent news about Ron. That brightens up even a hazy, smoke shrouded day.

Oh, I am so glad to hear about Ron, too! Good news.

So far as the fires...I'd heard about them, but didn't realize that they were indeed set intentionally. Ugh! People! Beyond appalling.

Jen,
At this point there's only one fire of the many that the authorities have reason to believe was intentionally set, but that one fire was responsible for the destruction of nearly 50 homes. 1 crazy person = Untold heartache

Thank you for your concern. The Luther fire was a few miles south east of us, so we're alright. I don't yet know about some of my Church group.
Tragically, it seems it was arson. 25 families are homeless. Thank God I didn't hear of anyone being hurt.

Trevor, I'm so glad you, your family, and friends are safe.

Hi Laurel,
We found your blog! It was wonderful to meet you yesterday and enjoy a piece of history you have created with your display of vintage cars.
We made it to Oklahoma City after a flat tyre set us back a few hours. Today we head to Amarillo TX on Route 66. We hope to see you again in the future when we return or maybe when you visit Australia!
All the very best to you from
Wayne, Feryal and Sara de Belin

de Belin family! It was truly wonderful to meet you and have time to chat for a while. Sara is a doll! You all seemed so excited about being on Route 66, and that makes me excited, too. I do hope we'll meet again some time!

P.S. So sorry about the flat tire!