Once again, today took me completely by surprise.   It was another Saturday without a minute of "down" time, and lots of variety and interest, hardly a typical January day at Afton Station!

Our first visitor came from Grove, OK, followed closely by our Tulsa friends Ron Warnick and Emily Priddy.   They stopped by on their way to a Route 66 geocaching expedition.  Here's Emily checking her iPad as Ron M. looks on and Phil and Marly chat in the background. 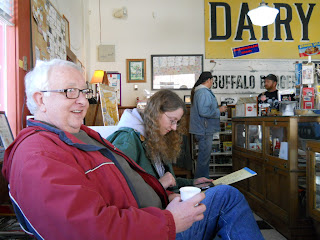 Shortly after they departed to head toward Picher, it was time to celebrate Phil's birthday.   Although not in any of these photos, Robin was with us for the festivities, too.  The purple cupcakes furnished by Marly were absolutely delicious, and we enjoyed an afternoon of purple lips and tongues.   After that, it was several hours before any more visitors arrived at the door.  We were having lots of laughs, but just as we were considering closing up a little early we had an onslaught of travelers!   As it turned out, instead of leaving early, we ended up closing almost an hour late. 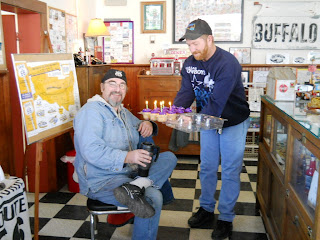 When I asked this couple where they lived, their answer was "Route 66".   I asked again, thinking I'd misunderstood.   But their answer was the same.  This lucky duo has been driving Route 66 (and a few places off Route 66) for almost two years, when they took to the road, living in motels along the way.  She's an artist, he's got a job that requires him to travel 100% of the time.  How nice!!  However, they have decided it's about time to settle down, so they're considering several potential homes for the future. 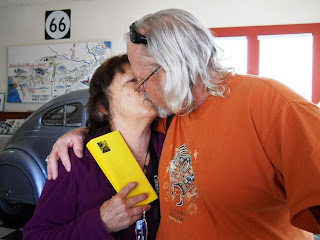 This couple is from Joplin and they were just taking a day trip down Route 66.  She bears a rather amazing resemblance to Snooki on Jersey Shore, we thought.   (If you happen to be reading this, we think you left your rosary case at the Station, at least we think it's yours.  We'll keep it safe until you are able to come back for it.) 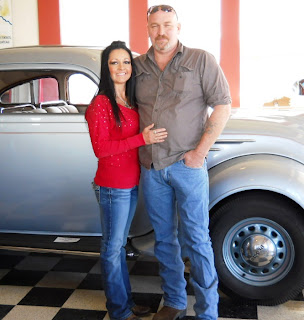 These folks from Tulsa dropped in with their amazingly well-behaved pup, Pudge.  Other visitors came from  Grove, OK and Chicago, IL. 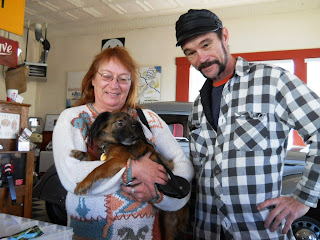 We were glad when Marly told us that he talked to Tom Bassett from the defunct grocery store across the street, and Tom indicated that instead of razing the entire building, they are beginning to clean out the debris from the collapsed roof and plan to put on a new one.  I'm breathing a BIG sigh of relief about that!  It would be a sad time for the town if that 1911 buggy factory building ceased to exist, not to mention the neat ghost sign on it's side. 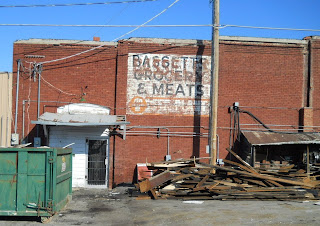 Needed to post you the bit of note to finally say thanks a lot yet again just for the spectacular thoughts you've discussed on this site. It's quite surprisingly generous with people like you to present publicly what a few individuals might have offered for sale as an ebook to earn some dough for their own end, primarily since you could possibly have tried it if you desired. These thoughts as well served like the easy way to fully grasp that some people have the same dreams much like my personal own to realize significantly more pertaining to this issue. I know there are a lot more enjoyable occasions up front for folks who see your blog.
Black National Public Seating Premium All-Steel Folding Chair