Sometimes clarity can only be achieved by a change of perspective.  I bounded out of bed this morning knowing intuitively that I was going to need some new perspectives today.   These magnificent Sundays, when the weather is unseasonably beautiful and I have no particular plans, must be savored and not wasted. And they should not be spent doing the same old thing.  Although I'm prone to falling into ruts, I constantly fight to climb out of them.    Therefore, this morning I decided to do a bit of Route 66 "backwards", when the sun would be just rising and I'd see it hit different sides of buildings than those I'm accustomed to.  But first, I needed fuel in the form of breakfast, and this morning, to adhere to the theme of alternative  perspectives, I decided to try a new place. 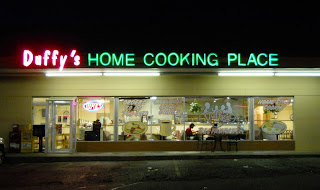 Duffy's turned out to be the perfect choice.  It's not far off Route 66, it opens at 6 a.m. (an absolute requirement for me) and it has some nice neon.   I soon found out that it also serves a nice breakfast!  "Home Cooking" is never much of a draw for me, since my mother barely knew how to boil water.  But if Duffy's veggie omelet and grits is an example of home cooking, then I'm all for it.  The atmosphere was just right, too.  (They did accidentally put tomatoes in the omelet when I asked them not to, but it tasted great and... ta da!   it didn't kill me!) 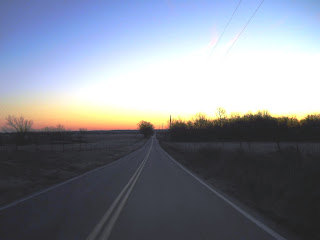 In order to do Route 66 backwards, I first had to go forward to where I wanted to start my backward jaunt.   I couldn't resist continuing east until the sun had completely risen.   I won't turn my back on a beautiful dawn.. . . 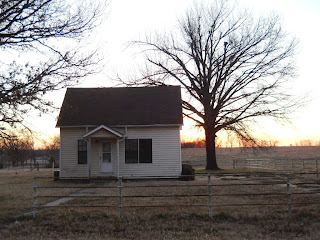 . . . or a tranquil little cabin on a  horse farm at sunrise.

Time to turn around and drive back into Tulsa via 11th St. (Route 66).   I decided to snap photos of some of the old stone buildings along the Route, most of which are either abandoned or marginally altered and repurposed.  I was excited.  I thought I was getting some awesome shots of the morning sun, which had now almost entirely risen, bouncing off of their irregular surfaces.  Well, it turns out my little point-and-shoot wasn't up to the assignment.   When I got home and checked out the images, I was very unhappy.   They were flat and monotone.  Ok, here's what I decided to do.  I turned them digitally into black-and-whites!  I like them much better this way.   I'm not sure when the era of facing structures from river rock started or ended on Route 66, but there's no doubt that these have been here since the road's heyday and with a little upkeep they could still be quite beautiful.  The fact that they're still here is somewhat amazing. 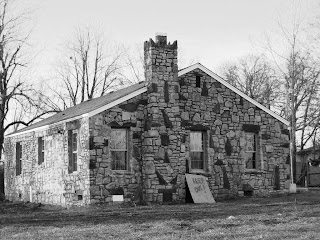 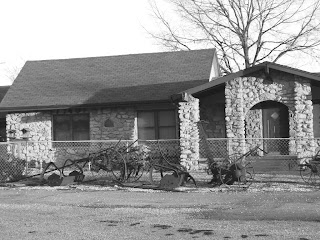 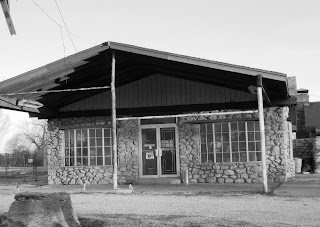 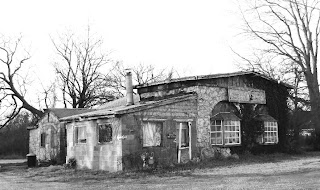 I arrived home about an hour ago and there is still a whole day ahead of me.  Maybe my camera and I can think of another place to roam before the day is over, and I can find a few more perspectives to enjoy.