My morning wanderlust didn't subside, so I  decided to run to the cable store and pick up a new remote to replace my recently deceased on.   Since I had to go past Ron M's house, I invited him to go along.  After finishing the errand, we decided to drive around a bit, and we ended up in Sapulpa.   Just off Route 66 there is the Frankoma House, built by John Frank, the gentleman who founded the famous (but recently defunct) Frankoma Pottery on Route 66, in consultation with architect Bruce Goff.  It was built in 1956 and uses pottery for the majority of its exterior and, from what I've heard and seen, for much of the interior as well.  Ron had pointed out the house to David and me when we were first exploring Tulsa in the late '90s, but I haven't been back since.

Since the home is still lived in, we couldn't go in, nor did we dare drive up the driveway.  So, the third photo is one that I plucked from the web.  It's quite an interesting structure.  Photos of the interior can be found here:  Frankoma House.  On the way home, we drove past the Frankoma factory.  How sad to see it closed up tight. 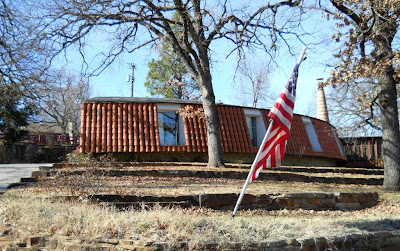 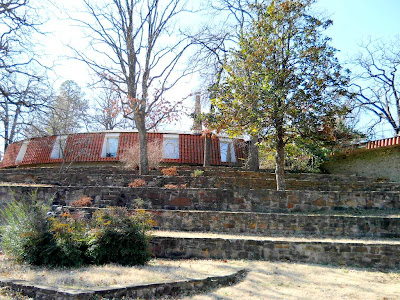 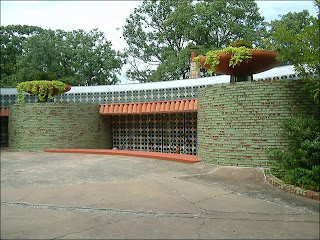 Also, I forgot to mention that if she were alive, my mother would be celebrating her 100th birthday today.  Happy Birthday, MOM!
Posted by Laurel at 3:27 PM

For anyone interested in the history of Frankoma, I wrote an article about it:

I was so excited when I spotted a Frankoma sugar and creamer (red glaze) in the Colin Firth movie "A Single Man". If you want to look for them they are on a shelf in his tasteful but minimally decorated 1960's kitchen and on screen early in the movie.