The Good Kind of Lost

There are two kinds of lost.   There's the bad kind of lost, when you're late for an appointment,  are in a questionable neighborhood,  your GPS dies, and  your map flies out the window.   Then there's the good kind of lost, which is what I was today.  It was a planned lost.  I wanted it that way.  I started out in familiar territory (then again, don't we always start in familiar territory?), and after stopping at a few Route 66 places,  I opted for a little country road I'd never been on, or even seen, before.  Once again, I just needed to get away.  I wanted to be lost.

These unseasonably warm and sunny days are like fine wine.   They must be savored before the bottle runs dry, because it's a long time before being able to buy another bottle of such succulence.  So, here I was in the car once again.   I know, I know.  I'm the biggest waster of gasoline on the planet.  But here's how I see it -- if I couldn't drive around (sometimes in circles), they'd  have to send me to the asylum, and that would probably cost the taxpayers more than the cost of me screwing up the ozone layer a couple of times a week.

I turned off my GPS.  It's pretty worthless anyway, more so because I've never taken the time to learn how to use it properly.  I turned on the radio expecting to hear some NPR Sunday educational stuff.  I don't like to listen to music when I drive, but I just happened upon a program where they were playing snippets of songs from blues musicians who have died in the past  year or so.  Just right for my mood.

On the way out of town, I stopped at the corner of Admiral and Memorial while still in Tulsa to try to discern where the Interpretive site I keep hearing about is going to be situated.  There's  a building for sale on the southwest corner which used to be a bank.  Could that be it?  If anyone knows, tell me! 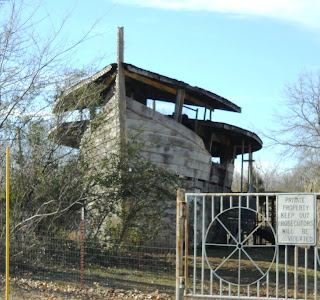 I continued down the road and found myself in Catoosa, so of course I  had to swing by the Blue Whale, which was closed up tight and devoid of tourists or anyone else. I snapped another picture of the crumbling ark there, which I find to be extremely photogenic. 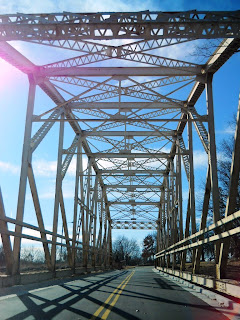 Once again, I stopped to admire the hunk of old historic Route 66 bridge that the wonderful folks at Molly's Landing, one of the best restaurants in the Tulsa area, had hauled to their property in order to save it from being dismantled and discarded.  Although these photos makes it look like it's still a major roadway, it's now just a path to the restaurant.  Very clever, I think. 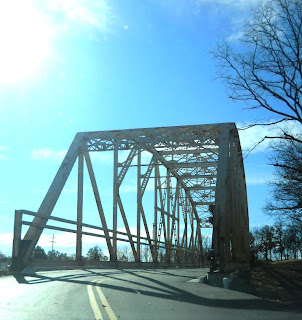 Just down the road is that old section of concrete Route 66 that winds through an upscale development.  It ends abruptly with a boulder in the road as the pavement crumbles and turns to dirt and gravel.  But there it is, behind that big rock, old Route 66! 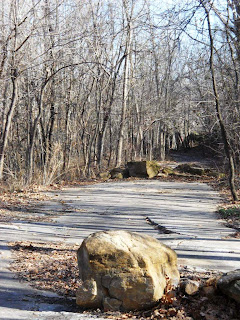 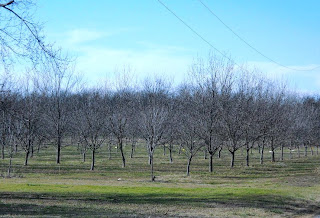 This is the part of the trip where I got lost.   I had never explored the small Route 66 town of Verdigris, Oklahoma, so when I arrived there I opted for a little country road which wound around hither and yon, through pecan groves and more pecan groves, some small ranches, and not much else.   I kept thinking I would eventually come to something I recognized, but I hoped that wouldn't happen too soon.  It didn't.  It was lovely to drive through the fields and I could only imagine how pretty this ride would be in the spring  with leaves on the trees, were I ever able to find it again. 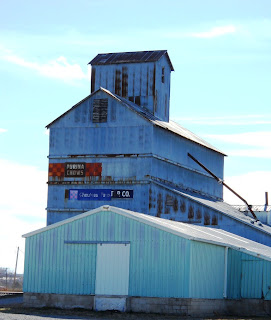 Alas, eventually I was back on the road to Pryor, a route familiar to me but which I've rarely traveled.  From there, through Choteau with just one stop to take a picture of their grain mill/grain elevator, just because I think they're neat buildings.

Route 66 is wonderful, but so are so many of the side roads that wander away from it for a while.  I  highly recommend getting lost as much as possible on your next trip down the Mother Road!

Lovely writing, Laurel. It took me right along with you.

This is the best post on this subject that I have ever read ... Great good reading, really worth cutting and pasting. Thank you!
protective covers

Hello - I am contacting on behalf of my client. We are requesting the link in the comment above, with the anchor text protective covers, be removed. This article is irrelevant to my client. Thanks!