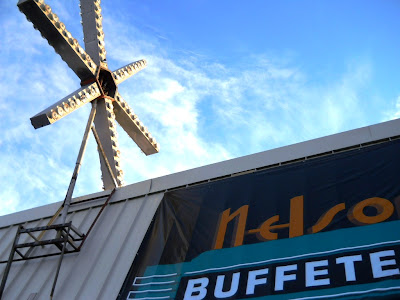 The second place I ever dined in Tulsa, Oklahoma was Nelson's Buffeteria.   The first place was the Metro Diner on Route 66, which was later obliterated so that the University of Tulsa could grow a bigger lawn, which I've never seen anyone use.  But that's another story.

Nelson's Buffeteria was in the middle of downtown and specialized in Chicken Fried Steak.  It wasn't far off Route 66, and had been downtown since 1929.   The day I went there, it was lunch time and very, very crowded.  We stood in line with others at the buffet -- the old fashioned kind where someone dishes your food for you -- and noticed that everyone ordered chicken fried steak, because the look on the face of the elderly gentleman doing the dishing looked like he would either cry or stab you if you dared to order anything else.  It was fun, and a great introduction to Tulsa, but I dared to not order the chicken fried steak that day.  I was such a rebel.  And obviously, I wasn't a true Tulsan quite yet.

In 2004, Nelson's closed the downtown restaurant.  Folks weren't coming downtown much any more, so business had fallen off considerably.  A Nelson's owned by another member of the family opened about a mile from downtown in 2009 and is doing well but last week, what is more like the original Nelson's Buffeteria, this time owned by the 73-year-old wife of the original owner, opened about 5 miles south of town.  I felt the need to be there to finally sample the famous chicken fried steak and christen myself as a real Tulsan.

So, I met a friend there this morning.  We were the first ones there.   We both ordered eggs and the chicken fried steak.  I felt guilty ordering something so decadent for breakfast, but that didn't stop me.  It just felt good to be participating in such a Tulsa tradition.  I wish I could say it was the best breakfast I've ever had in my life.  But I must confess, I just couldn't warm up to that deep fried pounded beef steak slathered in white gravy.  I had it once before, a couple of months ago at Ann's Chicken Fry on Route 66 in Oklahoma City, and at the time I said on this blog that it had changed my feelings about the dish forever, but maybe it just changed my mind about Ann's version of it.  Nelson's was ok, but maybe not such a great idea for breakfast.


Nevertheless, I did enjoy eating at Nelson's.  The eggs were great, and so was the toast slathered in not-quite-butter.   The building has an old googie "star" atop, and the sign is just like that of the old Nelson's, albeit not neon.  The old gentleman behind the steam table is probably the same one who served me downtown.  All of that made the visit very special.  But next time, I'll order the bacon. 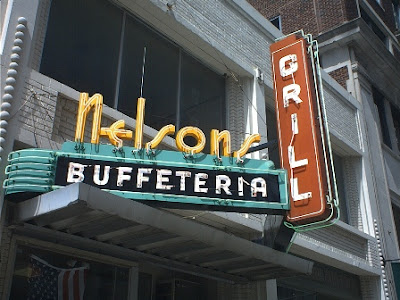 The old Nelson's downtown on Boston  Avenue.
Posted by Laurel at 3:57 PM