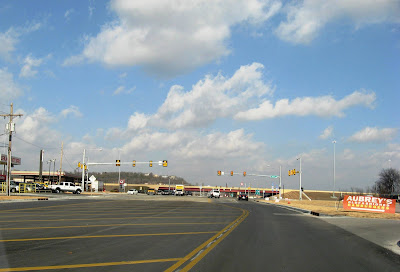 I'm not one to put down any of the wonderful little towns along Route 66, particularly in Oklahoma, but I have to admit to avoiding Catoosa whenever possible. There are two reasons for this: 1) I think the city fathers are out to get me. I'm a very careful and slow driver when I'm within city limits. Granted, I may put the pedal to the metal on the interstate now and then, but since driving is my hobby and having a great curiosity for and awareness of everything going on around me, of course I go slowly in order to observe my surroundings. In Catoosa, I've been pulled over three times for "speeding". (Note the quotation marks, which in this case indicate skepticism on my part.) Two of those times I've been let go with a warning, as I was only going 5 miles over the limit. The other time I was hit with an astronomical fine for . . . you guessed it. . . going 5 miles over the limit! I'm not alone in this. I have two friends who have also been pulled over numerous times for the "5 miles over" thing. (By the way, let it be known that I've never had a speeding ticket anywhere else in my life.) Catoosa's roads have ridiculous speed limits, and it's nearly impossible to keep one's car creeping that slowly. Therefore, I declare Catoosa a speed trap, and I advise anybody driving through the town to try to go 5 miles under the speed limit, if you can. It ain't easy, but it's a nice town so don't completely avoid it.

Secondly, I have bypassed Catoosa more recently because of the mess where 193rd E Avenue (Route 66) goes under the I-44 overpass then, going north, makes a turn shortly thereafter. It's been under construction forever, and it was indeed dysfunctional, as the nickname "Dysfunction Junction" indicates. However, yesterday it was announced that the construction had been completed, so I just had to drive out there and check it out. Indeed it is finished, and there are now 7 lanes approaching the underpass. The traffic was sailing through with ease. It's for sure not the prettiest piece of Route 66 in the country, nor does it retain a scintilla of historic value, but at least it's not a traffic-stopping bottleneck any more.
So, having negotiated that no-longer-problematic stretch and having made it through half of Catoosa in my new Subaru without attracting the attention of the police, I decided to proceed to the Blue Whale. I haven't seen him in a while and frankly, I missed him. A lot has been going on there since I my last visit. The town has taken an interest in the Whale and now has a weekend souvenir stand there where one can buy Blue Whale memorabilia. They even decorated him with lights for Christmas. 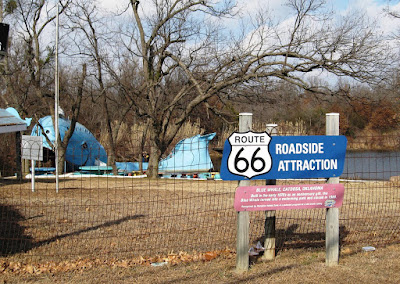 They also cleaned up all the weeds around the abandoned and crumbling Ark which used to be a part of the scene when the whole area was a small water park. 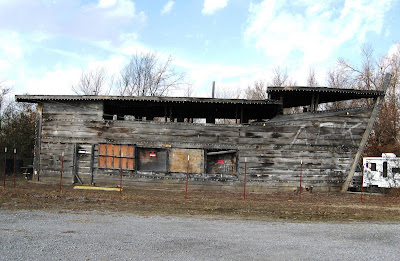 Mr. Whale seemed to be very nicely spiffed up, and there were three families with kids visiting while I was there. I was cheered! I then turned around and drove through Catoosa and on home, with no incidents.
___________


I can't say this for certain, but I'm guessing that, except in the very large cities, there aren't very many dim sum restaurants on Route 66. Tulsa is lucky to have one of them, and it's menu is very authentic and very good. I happen to love dim sum, and I spent a lot of time consuming it in New York's Chinatown, where it's the real deal. Guang Zhou in Tulsa is excellent and the menu is extensive. Dim sum is traditionally eaten as an afternoon meal (like brunch) on weekends, but Guang Zhou serves it every day except Thursday, although the menu is somewhat abbreviated during the week. There is still a nice array of selections, at least 25-30 available each day. I've been there four times now, and haven't been disappointed at all. 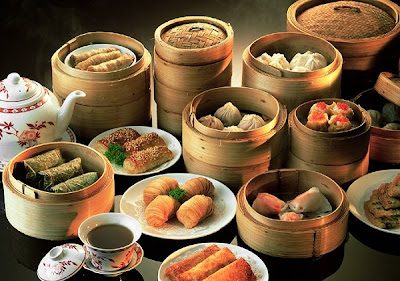 It's in an old McDonald's, so it's not beautiful. It looks like an old McDonalds, without the counter service and with soya on the tables. The staff is just great. And best of all, it's directly on Route 66 ! It's at 4003 E. 11th St., about halfway between Harvard and Yale. If you love dim sum like I do, it's a "must stop". Home - Guangzhou Dim Sum

ADDED NOTE: A Tulsa friend just informed me that the McDonald's in which Guang Zhou now resides was the first one in Tulsa and, if he remembers correctly, the first one in the state of Oklahoma.
Posted by Laurel at 2:46 PM

Catoosa sounds as bad as Arcadia. Lim once got a warning for drive 5mph over the limit. I've been ticketed a couple of times. And twice my truck was impounded there because my license plate expired and I didn't know it.

I like the Blue Whale, too. Hunter, the boy who likes climbing on your Airflo, just LOVES it! He like playing in water, and we had to watch him closely or he would have jumped in. We had to drag him away from there.

There's a good dim sum place in OKC called Grand House. It's a block north of 23rd St (Route 66 in OKC) on Classen Blvd. Everything looks so good that before we know it, our table is full of food and we can't eat it all. That's when doggy bags are handy.