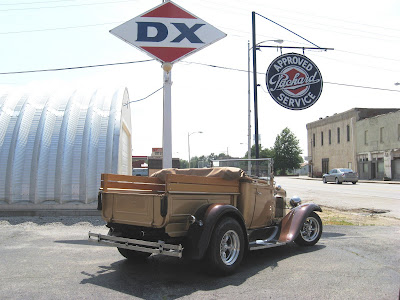 It was nice that the Station was open and ready to go when I got there this morning at 8:45, thanks to Marly. It helped get me out of the funk with which I started the day, but it was emotional ups and downs all day for me. Lamenting a quiet morning with more people passing by or taking pictures and leaving than those that actually stopped in, I actually found myself crying once. I need to get over this. It makes me feel like the wallflower at the senior prom when I don't have tons of visitors. I take it as a personal affront. Ridiculous!

The day improved as it went on, and ended with a respectable 19 visitors. They came from Tahlequah OK, Mountain Grove MO, Tulsa OK, Houston TX, Purcell OK, Goldsby OK, Olathe KS, Harrisville PA, Topeka KS, Grove OK, and Lansing MI.
A guy disguised as a traveler turned out to be a politician. He didn't bother to tell me that until I'd given him the guest treatment, then he pulled out a card and started spewing politics. I guess he didn't know my policy of NO POLITICS OR RELIGION SPOKEN HERE at Afton Station. He wasn't a member of my political persuasion, but even if he had been I doubt I'd vote for him. He wasn't my type. :-)
A wonderful man from Tahlequah OK returned for a second visit. His first visit was last week and, in my absence, Marly gave him the tour. He was so taken with the place that he came right back this week and stayed for over an hour while we chatted. He's a retired musician and plans to come back again next week. That certainly cheered my day.
In the morning I received a "wrong number", someone trying to contact the Afton Post Office, the phone number of which is one digit away from ours. Later in the day, the lady who had made the erroneous call gathered up her husband and their two little granddaughters and decided to visit us, based on our quick morning conversation. Love it! They were great people and well, what a way to make new friends!

Another interesting visitor today was Anne Slanina, a children's book author from Pennsylvania. She's just put out a new book in her "Annie Mouse" series and was on her way to Missouri to meet a gentleman whose poetry was the basis of her latest book. I think she's also doing a bit of research on Route 66 for her next one.... hmm... sounds good!

Betty Baumann made a few of these shirts which she will be selling at the Tri-State Festival on the 19th of this month as well as at Afton Station. They're short sleeved denim shirts upon which she has stenciled the decoration. 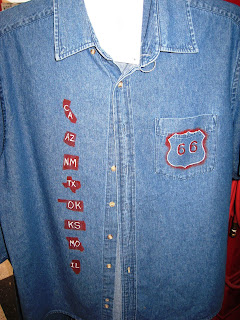 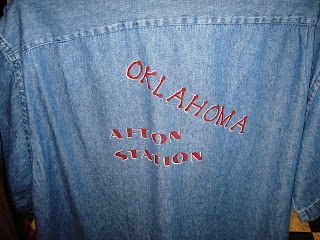 We put the Model A out this morning to get some air, and it did a pretty good job of luring folks into the Station. By the end of the day, I was smiling and satisfied. But when I got home at about 5, there was a message on my answering machine from a fellow from Australia named Laurie. He and his wife are traveling Route 66 and I SO wanted to meet them. Apparently they arrived just minutes after I left. He was detained in Kansas, so I missed him. Just one more disappointment on this Up and Down day.

I met Miss Anne a few Sundays ago at MidPoint. She was delightful and her books are adorable!

Don't tell my niece Lindsay, but she is getting all four Annie Mouse books for Christmas... personalized, autographed, and complete with a white feather from a guardian angel!

And yes, she is researching for a possible Annie Mouse on Route 66 book. I already sold at least 50 books for her... MidPoint, Big Texan Gift Shop, Afton Station :-) (And I'll buy at least 4 or 5!)

Please don't cry over those who do not come into Afton Station, they are the ones who should be sad. They are missing out on meeting one of the most amazing people on all of Route 66! The loss is theirs, not yours. Focus on those who do stop by and visit... (or call, get a wrong number and THEN visit!)