When I got to Afton Station today, the first thing I saw was everything from my file cabinet spread out all over everywhere. Fortunately, Marly was there to assure me that we hadn't been vandalized or burgled overnight. It seems that before they left last night, David and Marly saw a parade of ants entering and leaving the file cabinet, and by following them they discovered the culprit -- a couple of candy hearts left over from Valentines Day which had fallen to the bottom of the cabinet. While removing those, they observed some mouse-nibbling evidence in there, too. So, they sprayed to remove all the bad guys and set a mousetrap under my desk. It ain't easy keeping up with the invading pests around here, and even when we're scrupulous about keeping all food put away, something slips through the cracks. Literally. Sigh. . .

There was good news from yesterday as well, however. In my absence, Tattoo Man and Marly hosted quite a good number of guests, some from as far away as Italy and Australia. Laurie and Jean from Australia left me a nice gift. . . a decorative towel (suitable for hanging) which explains the Aussie bread called "Jimna" which, it appears, is cooked over an open fire. Very interesting!
Today, the guest list was varied and interesting, too. They came from Cambridge England, Westminster CO, Wyandotte OK, Gulfport MS, Akron OH, Mandal Norway, Quapaw OK, Queensland Australia, and Miami OK. After emerging from our showroom, the man from Akron said, "Who needs diamonds and rubies when you can have cars instead?" I liked that.
This couple from Australia, Robert and Kathi, are traveling Route 66 for the 2nd time, but this time taking a side trip to Niagara Falls to celebrate their 27th anniversary there. They were a wonderful couple and I wish them all the best for at least another 27. 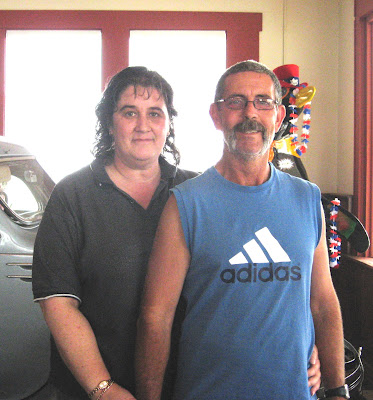 The concrete guys were here this afternoon, and the cement mixer stood at the ready. I had hoped to watch the pouring, but they weren't quite ready by the time I had to leave. By the weekend, we should have a foundation pad for the new building. 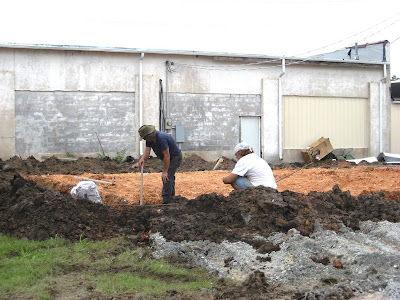 __________________
Some Afton kids came by on their bikes today and it got me thinking about bicycles. I got my first tricycle at age 2 1/2, when I lived in Cleveland, Ohio. I'll never forget the free feeling I experienced the first time my father let me pedal it down the street and back (probably only about 50 feet) without him walking right beside me. Even at that tender age, I remember the details of that moment of freedom and power. When I got home from Afton, I found this photo of myself on that bike and it brought it all back. The next bike I got was at age 7, and it was the almighty two-wheeler. Another big moment in my life. After that, it was my first car, a '64 Olds Cutlass convertible. I've always been a creature who feels best with wheels under me. That holds true to this day. 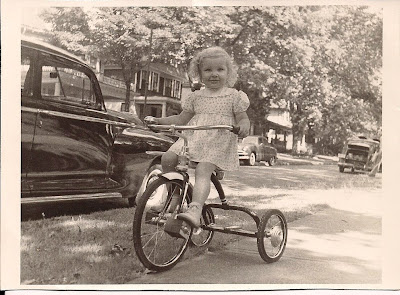 An apartment Lim and I had in Edmond had a bad mouse problem, too. I plugged every hole I could find with steel wool. We tried to put food up high. I put out sticky board traps. But nothing worked. Mice still got in. Lim was embarassed a few times when she had guests over.

So far no mice, Trevor. I think maybe they won't be back until winter. Marly put a lot of peanut butter on the trap and it's still there.

We had mice in our old house (built in 1705) in Connecticut, and we did the same thing you did with the steel wool, etc. Didn't work for us, either.