It was lovely to have a relatively non-chaotic day at Afton Station today. Ron M. joined me there again, and our guests arrived in a rather well-spaced manner, so although we had a good number of visitors, we had time to spend a little quality time with each of them.

A wonderful statistic is this -- we had four families who arrived (separately) with small children! I think that's a new record for one day at Afton Station. As I've indicated previously, most of our guests are of the "older" variety -- those who are driving Route 66 to relive childhood memories. Younger folks with even younger kids are somewhat rare. . . but not today! Furthermore, all of the kids were well-behaved and seemed interested in at least some aspect of Route 66. Several kids wanted to use the pressed penny machine. One little girl was terrified by the Snake Box until her mother very gently showed her that it was harmless. One lucky little boy got a ride in that awesome '57 Chevy golf cart that Marly was working on today. It was definitely Youth Day at Afton Station!

Here's Marly taking a little spin on the golf cart before adding a canvass " sun roof" at the request of the owner. 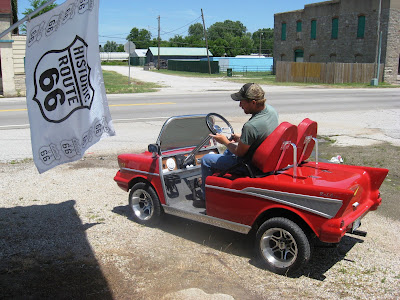 The guy on the left was taking his maiden voyage on his brand new motorcycle. His cousin (on right) was giving him some riding tips. They left from home in Miami OK and came to Afton first. Now those were two happy guys, especially the brand new biker. We hope he had a great ride! 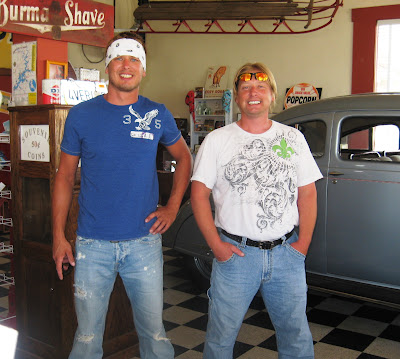 Now, about the aforementioned irony. . . I hired a guy to detail my car today. In four years and 148,500 miles the poor thing had never been detailed or waxed. (Yes, I know. . . I do tend to ignore the exteriors of my beloved "daily driver" automobiles.) So, several weeks ago a very nice guy came to Afton Station and asked to be hired for the job. Since Marly has way too much on his plate for me to heap another burden on him, I hired the other fellow. He came today and spent several hours spit polishing every inch of the car, then adding a coat of very good wax. Fine. He did a great job.

Less than three minutes after he finished the detailing (in the blazing sun), as we were pulling out of the Station to drive home, the heavens opened and absolutely torrential rain poured from the sky. And, that same torrent followed us almost all the way home! In fact, for the most part, it was coming down so hard that everyone was driving with emergency flashers on because the visibility was so bad. Sigh. . . So much for my beautiful detail job! Oh well, at least the interior is still beautiful. And I do apologize to to anyone who was stuck in the storm, because clearly my detailing was the catalyst for the rain. :-) 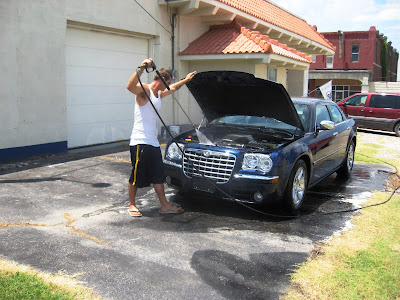 So glad you had some youth at the station today, that is what will keep the Route relevant.

I am sure that the car will look lovely in the morning, such a waxing lasts a long time.

"Furthermore, all of the kids were well-behaved"

I hope none of them climbed all over the cars like Hunter Hilton did when we visited your station.

He likes to climb all over ours at home, too. But, he comes by it naturally, since I was half-monkey when I was his age.

Trevor, I thought your kids were very well-behaved when they visited. They'd be welcome any time!