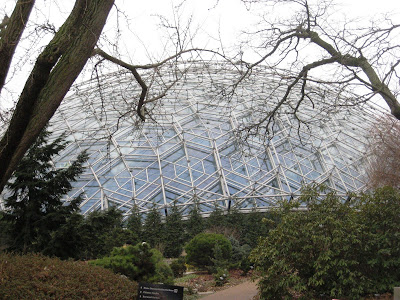 We got up Saturday morning and ate a quick breakfast at the hotel, then headed for the fabulous Missouri Botanical Garden. It's many acres of gardens, but due to the cold, drizzly day we confined most of our touring to the buildings, including the mammoth geodesic dome in which there is a tropical "jungle", complete with waterfalls, fish, and even mosquitoes! Wow, mosquito bites in January -- now that's a new one for me! The hot, damp atmosphere felt wonderful on a chilly day, so we stayed in the dome for quite a while. 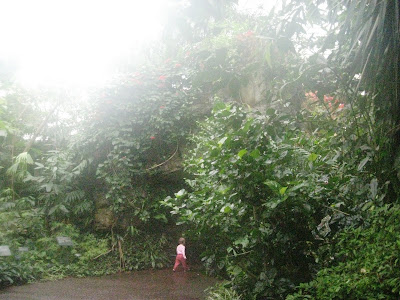 I took this picture before all the fog had left my lens. I like the look. 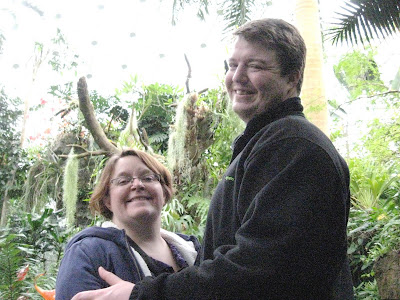 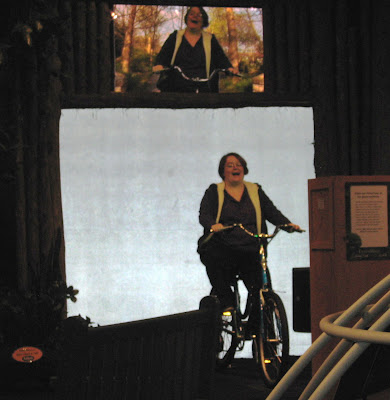 There were some interactive displays featuring green technology. Here's Sarah on a stationary bike in front of a green screen that makes her look like she's biking through the park.

The Botanical Garden also has a collection of Chihuly art glass sculptures interspersed through the grounds. Chihuly is not my favorite, but some of the pieces were quite striking. 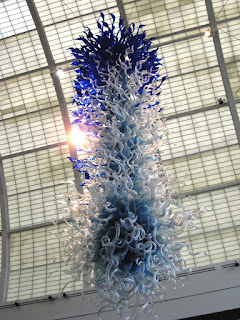 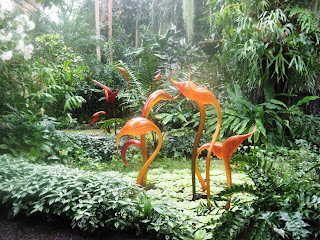 Since we're all lovers of anything googie, kitchy, or big we then sought out the "World's Largest Amoco Sign". Yes, it was big. 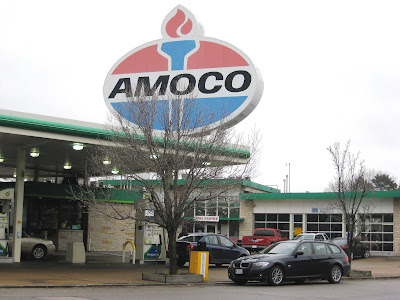 We lamented the fact that Ted Drewes isn't open in January, so we squelched our disappointment by eating lots of oysters (raw) and some alligator (cooked) for lunch at the Broadway Oyster House, a great historic spot near Busch Stadium. We also took a ride around town and into Forest Park, a large city park that was the site of the 1904 St. Louis World's Fair (Louisiana Purchase Exhibition). We did a little Route 66ing, and I managed to snap this pic of the famous Eat-Rite Diner. 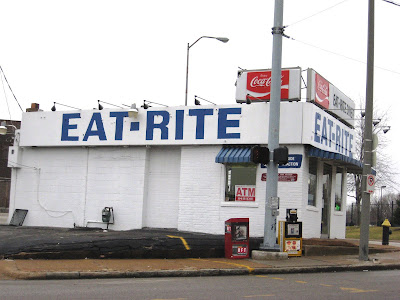 Before going back to the hotel, we stopped at Viviano's Grocery on The Hill and loaded up on Italian delicacies to take home.
Our evening dinner at Charlie Gitto's was very special. Charlie Gitto's Italian Restaurant (On the Hill) in St. Louis, MO 63110 I must find their recipe for the Penne Borghese with Cognac Cream Sauce. To die for.... as was the home-made peach gelato. Oh my, oh my!
On Sunday, it was up, hug and kiss the kids goodbye, and on the road by 9 a.m. An uneventful trip. I did stop and sneak a photo of the notorious Indian Harvest Trading Post in Villa Ridge, MO. It has been shunned by most of the Route 66 community because of the allegedly bad treatment most visitors have experienced by the owners. I'm too chicken to actually pull into the parking lot and get chased away, so I just took a photo from the side of the road. From there, it was drive, drive, drive until I got home. 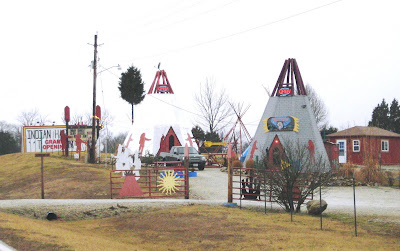 looks like a fun trip!!! i wish I had never turned into the those teepees. We refereed to the mean lady as "teepee lady" for the rest of the trip a couple years ago!

It looks like you had a great trip. We were doing a staycation before my son starts school and we stopped today at the teepees not knowing. We got treat horrible by the owners because we would not pay 2.00 per person to look in there store. We continued on our trip and we were just completely blown away by their behavior. If you do the trip again do not stop there. On your next trip if you are an animal lover stop in Gray Summit (one exit from the teepees) and go to Purina Farms. Great place...