Well, it's about time!

It felt SO good to get back to Afton Station for a full day today! Ron M. went with me, Betty stopped in, the temperature was almost 50 degrees, the toilet actually flushed, we had 8 visitors, and it just seemed like the world was finally rotating properly.

True, eight visitors isn't really a huge number and most were locals, but even so, it's better than I expected. We were visited by a couple from Collinsville, OK who were taking a short Route 66 weekend to celebrate their 19th wedding anniversary, three guys who were from Yukon and Edmond, OK and Oakland, NE, and two men and a young boy from Adair, OK. People were just out roaming around today, taking in the nicer weather.
____________
I got very nervous when I read an article in the Tulsa World this morning that indicated that the Craig County Courthouse in Vinita (OK) was in danger of being demolished. I had confused the county courthouse with the city municipal building, which I like very much. It's on Route 66 and when we pass it on the way to Afton, Ron and I often comment on how nice it is. Well, some research tells me now that I had the wrong building slated for demolition, and I presume this one will continue to stand. But, since I took a couple of pictures of it on our way to Afton today, I might as well publish them here anyway. 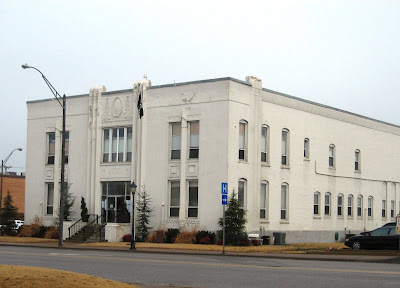 The frieze above the doorway is interesting -- two oil derricks paying homage to the town's contribution to the turn-of-the century oil boom. 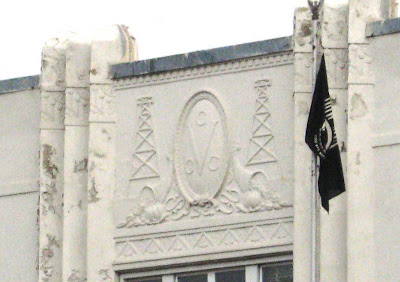 Don't forget -- If you have a little money burning a hole in your pocket, even if it's just a couple of dollars, you can probably find no better place for it than the American Red Cross as they struggle to help those poor folks in Haiti. Making this happen is easiest by just going to www.whitehouse.gov. They'll take you directly to the Red Cross.